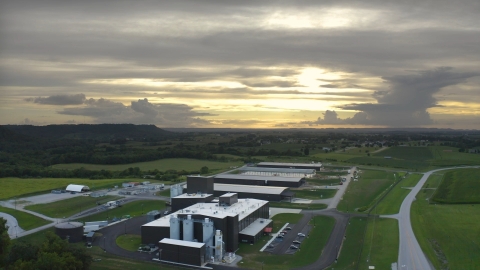 Diageo, the company that owns Johnnie Walker and Crown Royal, has been on a mission to reduce its environmental impact for years, and this new distillery is the latest in an impressive line of environmentally conscious projects. Bulleit Distillery is the proud new owner of evidence of the conglomerate’s continued interest in sustainability, with its new facility in Lebanon, Kentucky.

The new distillery is committed to net-zero carbon emissions across direct operations. All electricity used will be sourced from renewable sources. No fossil fuels will power production. It uses virtual metering technology, which allows it to track energy consumption more accurately.

These technologies will allow the Diageo Lebanon Distillery to avoid approximately more than 117,000 metric tons of carbon emissions annually, the equivalent of taking more than 25,000 cars off the road for a year, the company said. According to a prepared statement by the company:

“Two years ago, we set a vision and commitment to build our first carbon neutral distillery in North America. Now that the Diageo Lebanon Distillery is operational, I’m incredibly proud of the innovative actions from our teams and partners to fully electrify the facilities and power them with renewable electricity.

This is a significant step in our journey to create a low carbon future and be part of the solution to tackle the ongoing climate crisis,” said Perry Jones, president, North America Supply for Diageo.

The Green Future For Diageo

Combating climate change and its associated impacts is at the heart of Diageo’s goals for the future. The company has already halved its carbon emissions since 2008 and is now working to reach net-zero carbon across its direct operations by 2030 by implementing 100% renewable energy.

Diageo also noted that it is developing site-by-site roadmaps and is working to achieve net-zero carbon across the entire supply chain by 2050 or sooner, with an interim milestone to achieve a 50% reduction by 2030.

That will definitely be an accomplishment worth celebrating – cheers to Diageo.