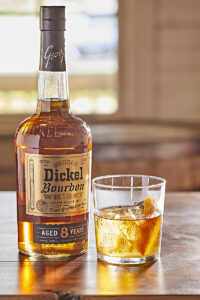 Cascade Hollow (aka George Dickel) has been on a tear of new product releases as of late, including their latest batch of George Dickel Bottled-In-Bond.  Their previous releases have all been labelled as “Tennessee Whiskey,” much like how Jack Daniel’s labels their products, but this one doesn’t beat around the bush as the product is called “Dickel Bourbon.”

While Dickel does use the Lincoln County Process, which uses charcoal filtering prior to aging their whiskey (as opposed to something like several Heaven Hill products that state “Charcoal Filtered” which is done after aging and prior to bottling), the production of their whiskey hits every checkmark in the legal requirement to call it bourbon.  Purposely labelling them not as bourbon helps to establish themselves as different from the Kentucky producers and helps the argument that the LCP has such an impact on the whiskey that it changes the category.

Except now, Dickel is admitting that they have plenty of well aged stock that doesn’t quite fit their standard profile and leans more towards a traditional Bourbon flavor.  Carrying an 8 year age statement, Master Distiller Nicole Austin said the whiskey offers, “…perfectly balanced combination of vanilla, oak, fruit and spice – the tasting profile most closely associated with traditional bourbon – without any one of them rising above the other.”

It will be interesting to try some of their Bourbon and Tennessee Whiskey side-by-side to see if there really is a noticeable difference between the two, or if this is just a nifty piece of marketing to get another product on the shelves.  If the latter is true though, it’s hard to be mad as a consumer of getting a 8-Year age stated, quality bourbon for an MSRP of $33.  We’ll have to see if Jack Daniel’s decides to respond and follow suite or stick to their guns that they don’t make bourbon (they do).