America’s Alcohol Consumption Habits Are Evolving; Here’s What You Need to Know 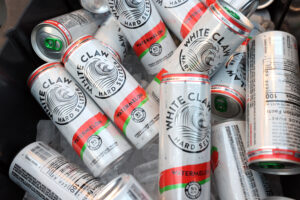 Drizly’s fourth annual Consumer Trend Report was released and stated that American alcohol consumption habits are changing. This year’s report looks at what Americans are poised to drink this summer and throughout 2022. The report is supplemented by sales data from the Drizly platform. So what are some of the key findings from this year’s report?

According to Drizly’s report, ready-to-drink (RTD) cocktails ranked as the top alcoholic drink respondents anticipate buying more this year. Furthermore, 73% of respondents said they would most likely enjoy RTDs at home. The popularity of RTD cocktails could lead many to stop making their own drinks at home. Additionally, more than one-third of respondents said that since they started drinking RTDs, they have made fewer mixed drinks.

Over the past five years, Margaritas have been the most popular kind of RTD cocktail on Drizly’s platform, accounting for 20% of overall RTD category sales. Tequila-based RTD drinks have garnered the most curiosity from consumers, with 43% of respondents saying they want to try them.

“There is potential for long-term growth with younger drinkers leading the charge. Nearly 70% of Gen Z respondents, along with 56% of Millennials, named tequila as their preferred spirit-base when shopping for RTD cocktails. Sales on Drizly paint the same picture, where margaritas have been the top-selling type of ready-todrink cocktail over the past 5 years, and currently hold 20% share of overall RTD category sales,” Drizly said in its report.

The alcohol delivery service also noted that when it comes to RTDs, the classics are the most popular choice, with Old Fashioneds, cosmos and margaritas topping the list for 62% of respondents. This beats out the likes of popular vodka-based cocktails in general (54%), vodka seltzers (37%) and other tequila-based cocktails (47%). RTD cocktails are relatively new, so an embrace of less popular or experimental cocktails could well be on the horizon as the format develops. To wit, 43% of survey-takers said they’re up for trying something new – so there could be a lot of interesting developments in the world of RTD cocktails in the future.

These changes in drinking habits will have a ripple effect on the alcohol industry, with producers and retailers needing to adapt their offerings to meet consumer demand. With all this new information, only one question remains: Are you ready for the rise of the RTD cocktail?