Dubliner Brings Whiskey And Craft Beer Together For A Smoky Dram 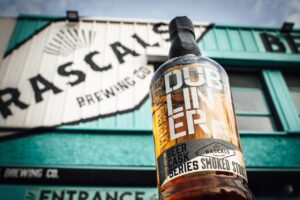 The Dubliner Irish Whiskey has announced their latest release of a “smoked” whiskey.  Rather than using peated malt, the whiskey is getting its influence from Irish craft brewer Rascal Brewing Company‘s Smoked Stout Beer.  Dubliner gave the brewery some of their ex-bourbon casks that held their whiskey.  The casks were filled with beer before being returned and fresh whiskey returned to them to age for 3 years.

“We are excited to launch the Dubliner Smoked Stout Irish Whiskey in Ireland,” Bronagh Hunt, brand director for parent company Quintessential, said in a prepared statement. “Big on flavor, it’s sure to appeal to whiskey and beer drinkers alike.”

Rather than a heavily peated whiskey, the beer is said to impart a subtle, toasty smoke to the distillate.  Less than 2000 bottles will be available for customers in Ireland with a MSRP of €35.