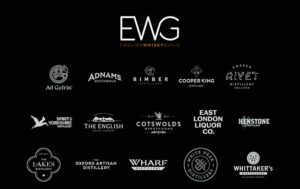 Brand logos from all the distilleries that have joined the English Whisky Guild.

The English Whisky guild has officially formed as the market value for English whisky is projected to increase by $48 billion in the next decade, according to the guild.

In response to increased consumer demand for English whiskies, 15 distilleries from across England have collaborated to form the English Whisky Guild (EWG). The EWG has a vision of showcasing and protecting the quality and diversity of the unique whiskies crafted in England.

The distilleries have been collaborating on the project for several months to support each other, recognize innovation, help individual businesses develop and support their ability to create great whisky.

According to The Spirits Business, the guild said its mission was to have an “overarching vision of showcasing and protecting the remarkable quality and diversity of the now numerous, unique whiskies that are crafted in England” and showcase the diversity of flavor profiles and production techniques that English whisky has to offer.

Whisky writer David Broom commented that this move was “a significant and hugely welcome step in the evolution of English whisky” and would “ensure that the open-minded and varied manner in which England’s distillers are approaching whisky will be safeguarded.”