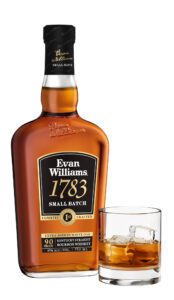 Heaven Hill has announced the rebranding of their Evan Williams 1783 Bourbon Whiskey.  The bourbon, named for the year the Evan William’s opened his distillery in Louisville, will now be bottled at 45% (up from 43%) along with cosmetic changes to the bottle.

“1783” remains the focus with gold lettering, but now the bottle has Evan Williams’ signature blown into the glass itself.  More focus is give to “Small Batch” which Heaven Hill says the whiskey is a blend of less than 300 barrels.  The label also now says “Extra Aged In White Oak.” While the label doesn’t have an official age statement, it is reported as 6 to 8 years old.

While the packaging is sleek, we here at Whiskey Raiders are more excited about the bump in proof.  Julie Cole, the Evan Williams Senior Brand Manager, said, “With a return to the original 90 proof, the award-winning mashbill of Evan Williams 1783 is full-flavored and works both as a cocktail base and stand-alone sipper. We are excited to bring more focus to what is known as the ‘best kept secret’ in the Evan Williams Bourbon family.”

The new bottles have been shipped this month and will retail for $19.99.