Midleton Distillery has set up what could be one of the best virtual whiskey courses yet. As an alum of Edinburgh’s Whisky Academy, I am pretty excited about one feature imparticular that Midleton is offering its students.

Along with Middleton’s virtual course, students will receive a kit in the mail with everything needed to learn to taste whiskey, which is arguably the most valuable thing to know when it comes to whiskey. Frankly, nobody really cares about the history; but everyone wants to impress their friends with being able to confidently say which whiskeys are great neat or in a cocktail. 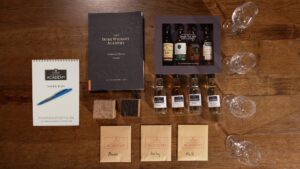 It’s refreshing to see that the distillery has taken the extra step that allows participants to learn actively and not just sit behind a screen. They also didn’t skimp on the whiskeys in the box, offering brands such as Redbreast, Green Spot, and Very Rare Barry Crocket Legacy.

While most online whiskey courses are primarily a history lesson in the spirit or give their alumni made-up titles like whiskey sommelier (e.g., Wizard Academy or Whiskey Marketing School), it’s not usually worth the purchase, but this one shows promise.