Welcome back to another segments of “Great vs. Terrible,” a series that notes when terrible people are involved with great whiskey, and vice versa. In this case, we’re looking at the great musical duo: Florida Georgia Line – and their terrible Old Camp Whiskey release.

Nothing goes together better than a great whiskey and an awesome soundtrack. Florida Georgia Line, the all-star country music duo composed of Tyler Hubbard and Brian Kelley, surely knows this. With some of the most popular songs of all time, including Cruise – the most downloaded Country music song ever, there’s no doubt that music comes easy for FGL.

Whiskey, though? Not so much.

Old Camp is a whiskey liqueur released by the Line Brothers. Out for less than a year, it’s starting to surface in whiskey markets all across the country, just in time for summer and concert season. Looking at the specs, there’s nothing immediately impressive. A two-year-old whiskey with added sugar and peach/pecan flavoring is a real head-scratcher. Whiskey definitely doesn’t need to be 10-plus years old to be good — just look at Wild Turkey or Jack Daniels — but two years is a lack of aging almost impossible to overcome (although there is the occasional exception), even with sugar and flavoring. 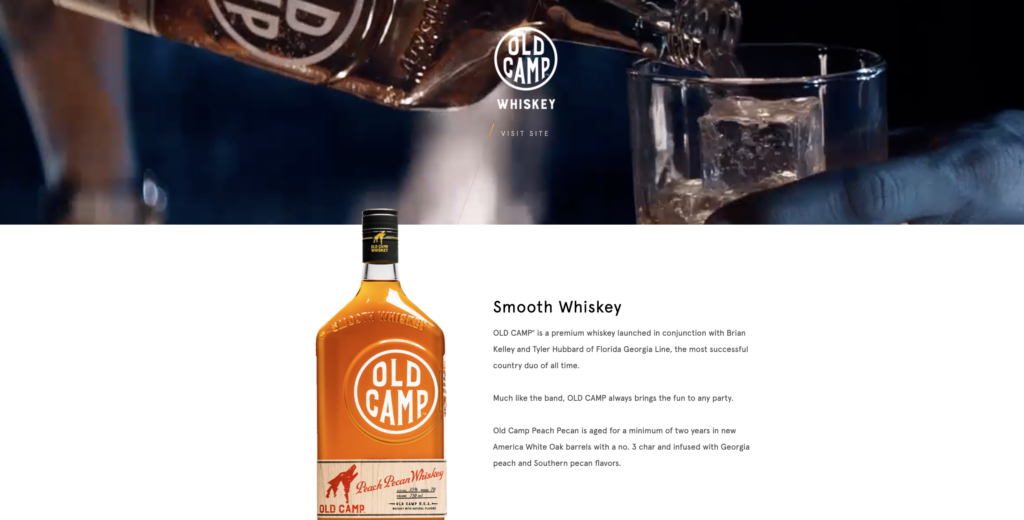 No doubt modeled after the runaway success of Fireball, which combines neutral grain spirits and cinnamon additives, a whiskey on the fruit portion of the flavor spectrum is a surprise from a band that often references moonshine (unaged whiskey distillate). Bottled at a measly 35% ABV, it’s not even strong enough to actually be legally certified as whiskey.

All in all, if you’re looking for a great tailgate whiskey, you can’t go wrong with the real thing. There’s no shame in mixing with Coke, sweet tea or another mixer of choice, but do your day-after-concert hangover a favor and skip the sugary liqueurs. We recommend Evan Williams Single Barrel or Early Times if you’re looking for a far better, <$20 bourbon in its place.