‘We Want to Be a Whiskey for Everyone’: Award-Winning Frisky Whiskey CEO Nicole Young is on a Mission to Imbue the Whiskey World With Diversity 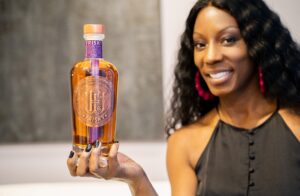 CEO and co-creator of the world’s highest-rated flavored whiskey, Frisky Whiskey, is as unexpected and warm as the whiskey itself.

Nicole Young has a vast work history ranging from broadcast to food development, but Frisky Whiskey — which Young describes as “premium whiskey with style and whimsy” — is her first foray into the whiskey world, and it’s safe to say it has been a success.

Frisky is the first flavored whiskey to ever earn 95 points for taste at the Ultimate Spirits Challenge. It also garnered a gold medal from the San Fransisco World Spirits Competition.

Frisky Whiskey developed out of an atypical background. It wasn’t always meant to be its own brand, and Young was not always meant to be the CEO. Originally, the whiskey was planned as a new flavor for James Landis’ William Wolf Brand after the success of Wolf’s original pecan-flavored whiskey.

When Landis decided to make Frisky into its own brand, he and Young met and negotiated a deal that saw Young take on the CEO role and become a major shareholder of the company.

“I did a lot of work with food brands and recipe development when James was launching William Wolf; he and I had worked together,” Young said. “I had also created recipes for a couple of other brands of his, and prior to that we worked together on his first brand Hpnotiq. When he was expanding William Wolf into whiskey, he asked me if I would come on board as a consultant to create a flavor that would appeal to non-whiskey drinkers. I was not a whiskey drinker myself.” 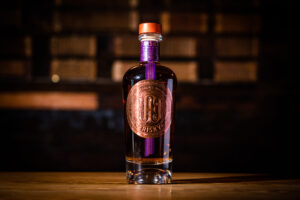 Many people are intimidated by whiskey, Young said, and she wanted to change that by creating a more accessible whiskey.

“A common preconceived notion about whisky is it burns going down, and it’s true for a lot of whiskeys,” Young said. “But the average person who doesn’t drink whiskey finds that scary right? If they’ve never tried it, and if they have tried it, they don’t love it.”

In their research, the team found that notes of caramel and vanilla continued to come up, and Young decided to start there.

“Why don’t we lean into those flavors?  At that time other brands were relying heavily on fruity flavors to mask the whiskeys, so we went in another direction.” Young said.

The direction paid off. After tasting the whiskey myself, the most impressive aspect was its lack of artificial flavoring, unlike other flavored whiskeys.

“[Other flavored whiskeys are made with] spirit whiskey or whiskey filler, it’s whiskey and other stuff. So they start off with something that can’t give you a great taste,” Young said. “Then you’re getting fake apple, fake mango, fake whatever.”

Artificially flavored whiskeys are most popular for mixing into cocktails, and Young wanted to create something more versatile.

“We also want it to be a flavored whiskey that you would enjoy on the rocks or neat,” she said. “You don’t need to mix it; we’re not hiding anything. It’s premium whiskey, it’s an all-natural flavor. You don’t get artificial. You don’t get syrupy.”

The Future of Frisky Whiskey

Even though Frisky Whiskey is fairly new, Young has big plans, including national distribution for the brand that is currently available only in California, Illinois, New Jersey, New York and South Carolina, retailing for about $34.

While Frisky Whiskey is intended to be for everyone, a female perspective exists at the forefront of the company. With women making up about 36% of American whiskey drinkers as of 2020, according to data from the market research firm MRI-Simmons, Young wants to tap into that market. She believes that as a woman who heads the company, helped create the flavor and employs a team of women, Frisky Whiskey is perfectly positioned to help the whiskey world transition into a more inclusive culture.

Diversity in the Whiskey Business

Included in the CEO’s vision for the brand’s future is creating a more diverse and inclusive spirits industry.

“Whiskey has always been a guy’s game, but we’re not looking to just be a whiskey for women. We want to be a whiskey for everyone,” Young said. “Something that we are looking to do is not only foster more whiskey drinkers but foster more entrepreneurship for people of color. I think when people see somebody doing something, it might inspire them to do it.

“I’m excited about hopefully blazing a trail for people of color and specifically women of color to have a place in whiskey, as in ownership. There’s actually quite a bit of consumer presence as far as people of color goes, but in ownership, there is not. And I hope to be a conduit to more.”

Young is focused on collaborating with entrepreneurs whose business ideas align with Frisky Whiskey, which Young says is all about fusing fashion with Frisky’s one-of-a-kind flavor and brand direction. 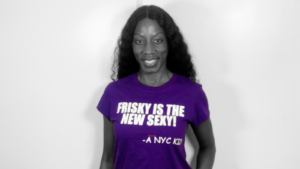 Frisky Whiskey CEO Nicole Young is pictured wearing a T-shirt With one of the brand’s favorite slogans “Frisky is the new sexy,” made in collaboration with A NYC KID, a clothing brand located in New York. The product will drop in August in conjunction with black business month.

Young wants to use Frisky Whiskey to collaborate with and spotlight independent designers that wouldn’t otherwise receive that attention.

“I’m fortunate that I have an opportunity to put something out there and to have a team behind me and partners that have been in this industry for many years,” Young said. “And a lot of people do not have that.”