Ugly Christmas Sweaters are Coming for Your Scotch This Winter 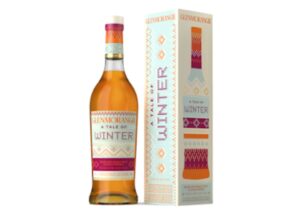 On Tuesday, Glenmorangie announced the launch of its new limited-edition bottle, which is sure to be one of the most festive scotches on your shelf during the holiday season.

The new whisky, A Tale of Winter, is bottled at 46% ABV and a 13-year-old single malt scotch whisky, finished in Marsala wine casks after being matured in bourbon barrels.

It’s time to unwrap our delicious new limited edition, Glenmorangie A Tale of Winter. Pull out your warmest winter jumper and get ready to enjoy! pic.twitter.com/p7SGMtbSJu

The story behind the new design is a whimsical one. According to Spirits Business, “When Dr. Bill Lumsden, who heads up Glenmorangie’s innovations, found himself snowed in at home, he began imagining a whisky that would capture the feeling of being wrapped up indoors, enveloped in a snug winter jumper, while outside was thick with snow.”

Beginning Nov. 1, you will be able to get your hands on the sweet, fruity, limited-edition bottle, clad with its very own sweater.