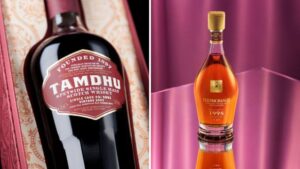 Glenmorangie and Tamdhu released vintage whiskies this week, both priced over $400.

The Spirits Business on Wednesday reported the launch of Glenmorangie’s new Grand Vintage Malt 1988, which comprises the first Glenmorangie stocks to be aged in new charred oak casks. The whisky that was aged in those casks has been blended with whisky that had been finished in oloroso Sherry casks. The vintage is said to be subtly sweet.

Dr. Bill Lumsden, director of whisky creation, said: “New in post in 1998, I had all sorts of ideas for new and delicious whiskies. And one of my first experiments was with new charred oak casks.

“At the heart of Glenmorangie Grand Vintage Malt 1998 is a parcel of that experimental whisky. Aged in those casks for 23 years, it gives the limited edition a wonderful spicy note and an amber glow.”

Meanwhile, Tamdhu unveiled its latest whisky on Tuesday. Tamdhu Dedication Society Single Cask 2003 release is an extremely limited-edition single malt that has been selected to celebrate the brand’s 125th anniversary. The release consists of only 600 bottles that can be purchased exclusively from the Tamdhu website.

“For our 125th anniversary, it was imperative that we consulted our most devout fans to bottle a single cask that celebrates Tamdhu’s rich history and toasts to its exciting future,” said distillery manager Sandy McIntyre. “The result, after much deliberation, is this Dedication Society bottling. As a whisky, it embodies all that is good about our distillation style and our dedication to full Sherry maturation.”

“With aromas of apples and plums and tastes of orange chocolate and clove, this whisky brings a new dimension to Glenmorangie’s elegance,” Lumsden said of the vintage’s flavor profile.

Tasting notes from the brand include toffee, ripe pears, plums and baked apples, and oak. The palate is said to be zesty with fruitiness, chocolate, raisins and figs. The finish boasts sugared almonds, leather and dates.

Grand Vintage Malt is bottled at 43% ABV, with a suggested retail price of $900.

The Tasting Notes for the 125th Anniversary whisky are said to include vanilla aromas, stewed apples and licorice. The palate is full and balanced, with spiced fruit loaf, jam and chocolate. The finish comprises dried fruits, soft spice, and Sherry notes.

The whisky is bottled at 55.4% ABV and will retail for $408 per bottle. Tamdhu Dedication Society Single Cask 2003 can only be purchased online from tamdhu.com