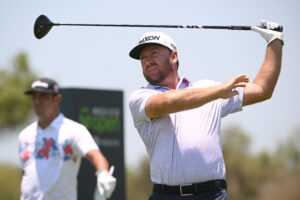 PUERTO VALLARTA, MEXICO – APRIL 28: Graeme McDowell of Northern Ireland plays a shot during the first round of the Mexico Open at Vidanta on April 28, 2022 in Puerto Vallarta, Jalisco. (Photo by Orlando Ramirez/Getty Images)

Alongside brand development engine, Fluid Assets, and the world-renowned Boann Distillery, the team has created a whiskey that “encourages people to be inspired by the moments shared with family and friends today, while remaining connected to their past legacy.”

Wherever I am, I am grounded by where I came from…

“I’m passionate about Grey Coast because it represents my life’s story and in many ways is a testament to the Irish American dream,” said Graeme McDowell. “It’s a marker of history and accomplishment, a celebration of friends and family, a symbol of dreams turned reality, and a nod to a life well-lived.”

The liquid is a blend of four different Irish whiskeys. Grey Coast was crafted at the Boann Distillery in Drogheda, a heavily awarded distillery in Ireland.

“From overseeing every aspect of the brand to doing numerous tastings until the unique blend of whiskies was just right,” said Graeme. “I’ve worked hard to ensure this whiskey reflects who I am – and I couldn’t be happier with the result.” 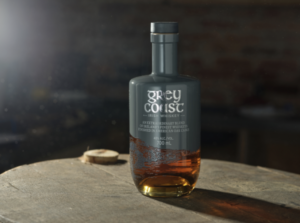 “We are looking forward to launching Grey Coast, Irish Whiskey that stands out from the genre,” said Mike Morgan, President of Prestige Beverage Group. “Combining tradition and technical know-how with the personal influence of Graeme McDowell, this group has created something that will undoubtedly connect with lovers of Irish whiskey and attract others to this rapidly growing category.”

Grey Coast Irish Whiskey (80 proof / 40.0% ABV) will be available at participating grocers, liquor stores, and restaurants in markets across the U.S for $36.99.