When Too Much Good Whiskey is Too Much: The Science of Hangovers and How Some Experts Suggest Curing One 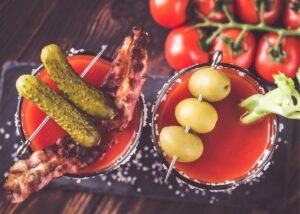 Most of us have experienced the dreaded hangover after a night of enjoying our favorite dram(s). You feel awful – tired, headachey, nauseated and just plain miserable. But what is it about alcohol that causes these symptoms? And more importantly, is there anything you can do to cure them? We’ve explored the science of hangovers and have some tips on how to alleviate them.

The Oxford Academic explains that hangovers are caused by the acute toxic effects of ethanol (the intoxicating ingredient in alcohol) combined with its metabolites, acetaldehyde and acetic acid. Both can cause physical reactions that trigger a hangover. The symptoms develop when blood-alcohol content returns to zero after drinking excessive amounts of alcohol.

So, how to avoid the dreaded hangover? Unfortunately, little research has been done on hangovers despite how many people experience them, and a variety of factors influence the severity of a hangover, including gender, age, body weight/shape, general health, mood state prior to drinking, type(s) of alcoholic beverage consumed and genetic predisposition. However, it is unknown why these specific symptoms occur when levels return to normal or whether they are related to one another or not at all. 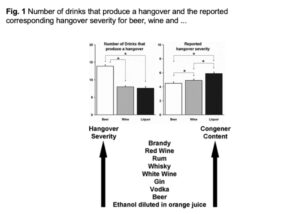 The symptoms and extent of alcohol hangovers are influenced by a variety of factors beyond the quantity of alcohol consumed. For example, congeners are chemicals that give drinks their flavor and color. The amount varies in different types of alcoholic drinks (pictured above). When scientists test the negative effects of heavy drinking, they remove all the congener chemicals from the drink. But in reality, people consume a variety of different alcoholic beverages, some of which have higher levels of congener components than others, skewing the data.

With all of this information, it’s clear how to avoid the hangover, but what are some popular methods that actually cure a hangover? Per the Smithsonian, there are many different ways depending on where in the world you are. “You can cure a hangover by eating shrimp (Mexico), pickled herring (Germany), pickled plums (Japan) or drinking coffee (U.S.), strong green tea (China) or tripe soup (Romania). A number of popular foods and beverages — like the Bloody Mary, Eggs Benedict and even Coca-Cola — were even developed specifically to “cure” hangovers.” Here are some other remedies.

Hair of the Dog. Harvard Health Publishing‘s Dr. Swift states that there may be something to the “Hair of the dog” — drinking alcohol to cure a hangover — to ease the symptoms of alcohol withdrawal the morning after. “Both alcohol and certain sedatives, such as benzodiazepines like diazepam (Valium), interact with GABA receptors on brain cells,” he explains. “And it’s well documented that some people have withdrawal symptoms from short-acting sedatives as they wear off. Perhaps the brain reacts similarly as blood alcohol levels begin to drop.”

However, Swift does not recommend using alcohol as a remedy. “The hair of the dog just perpetuates a cycle,” he says. “It doesn’t allow you to recover.”

Use painkillers, but avoid Tylenol. Acetaminophen (Tylenol) should be avoided, as it will only make the symptoms worse. Other nonsteroidal anti-inflammatory drugs (Ibuprofen, Motrin) can help with both the headache and the general feeling of being unwell. However, NSAIDs may irritate an upset stomach if you have one already. If you must take acetaminophen, do so in moderation. If alcohol is still present in your system, it may enhance acetaminophen’s damaging effects on the liver.

Take your vitamins. Specifically, B vitamins and zinc. According to Harvard  Health Publishing, a study recently was published in The Journal of Clinical Medicine about a 24-hour dietary recall test that was conducted before and after heavy drinking. It was found that people who consumed more zinc and B vitamins in their food and beverages had less severe hangovers.

Hydrate. Because alcohol inhibits the release of vasopressin, a hormone that reduces the volume of urine manufactured by the kidneys, it promotes urination. Therefore, it is likely that dehydration is a culprit. Any queasiness or dizziness can be eased by hydrating.

Caffeinate. Caffeine may not have any anti-hangover effects of its own, but as a stimulant, it will help in alleviating drowsiness.

Unfortunately, there is no one-size-fits-all answer to avoiding hangovers. Some general tips that may help are drinking in moderation, eating before and while you drink, alternating alcoholic drinks with water or nonalcoholic drinks and choosing lower-alcohol beverages. However, it’s important to remember that everyone’s body is different, and what works for some people might not for others. Experiment a little and see what helps you avoid feeling like death the morning after a night out.

If nothing else, just know you’re in good company – almost everyone has experienced a hangover at one time or another. Cheers.