The Wait is Over: Hard Mountain Dew is Now on Shelves in These 3 States, and Twitter Can’t Get Enough 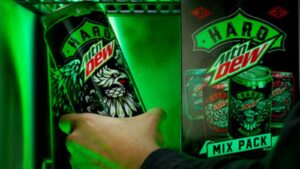 The wait is over for Mountain Dew fans in Florida, Tennessee and Iowa.

Boston Beer Company launched Hard Mountain Dew on Tuesday in those three states with four flavors: original MTN DEW®, Baja Blast®, Black Cherry and Watermelon. Consumers can look forward to no caffeine, zero added sugar and 100 calories per serving, with each 12-ounce can boasting 5% (ABV), not too bad for a ready-to-drink canned cocktail. 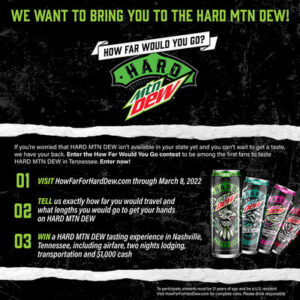 Image via The Boston Beer Company.

Mountain Dew is finally living up to its original intent, as it was created to be a mixer for spirits, specifically moonshine. If you live in a state where Hard Mountain Dew isn’t yet available and can’t wait to try it, have no fear. From March 8 through March 15, go to HowFarForHardDew.com to participate in the contest called How Far Would You Go? for the chance to win a trip to Tennessee – the birthplace of Mountain Dew.

To enter the contest, simply head over to the link above and explain how far you would travel and to what lengths you’d go for a taste of HARD MTN DEW. You’ll be judged based on creativity, authenticity and boldness. The winner receives airfare, two nights of lodging, transportation, a $1,000 spending allowance and a HARD MTN DEW tasting experience for you and a friend.

However, the release of the new RTD, or even the chance to win a trip, is not the most fun part of the story — Twitter has been the highlight, with nonstop hilarious tweets.

All I know is, as a teenage #MountainDew addict, #HardMtnDew is literally the first and only entry in the quote-unquote hard seltzer category I’m actually eager to try. pic.twitter.com/opQ8Kaih1l

Your Drunk Uncle Bob’s taste buds and liver are ready whenever you are ready for some commentary. #hardmtndew https://t.co/jjWQfatUkH

FULL STORY: It Is My Duty As A Video Game Journalist To Inform You About Hard Mountain Dewhttps://t.co/8gs5Juns0y #HardMtnDew $PEP $SAM

So, if you’re disappointed that Hard MTN DEW in your state, and you don’t win the contest, Twitter is here to tide you over until the RTD cocktail graces the aisles of your grocery store.