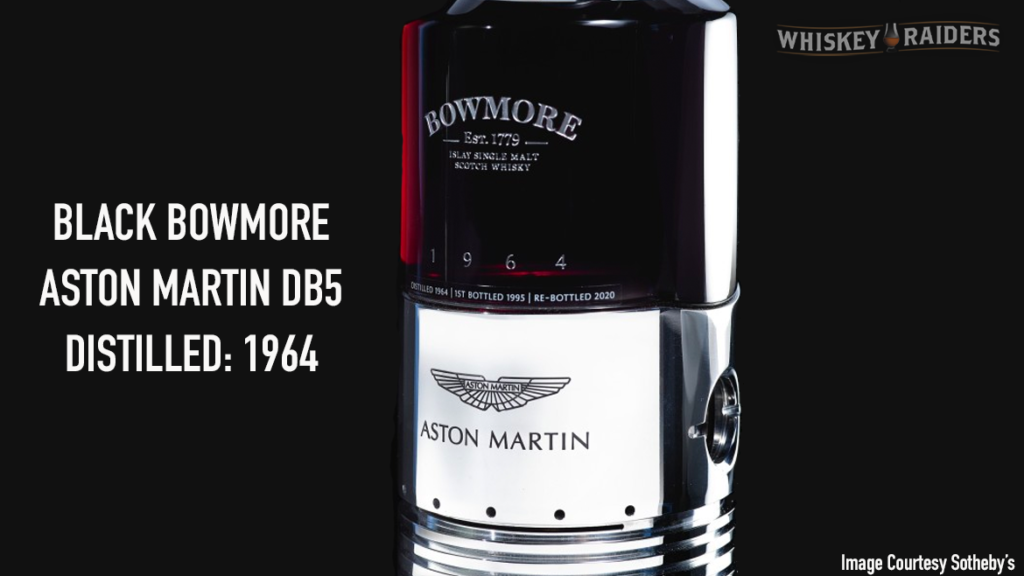 Fans of James Bond and fine spirits have hardly had to dig deep to find an excuse to enjoy a film with a drink in hand in the past, but a new auction entry at Sotheby’s pairs the two hobbies closer than they’ve ever been before.

A sole bottle of Black Bowmore Aston Martin DB5 released at auction yesterday morning via the popular house: Sotheby’s. Estimated to soar into the 6 figure bidding range, this release is no slouch in oddly well populated hyper premium whiskey category. Featuring components from perhaps the most iconic of all James Bond Aston Martins – the 1964 DB5.

“The partnership between Bowmore Distillery and Aston Martin marks a watershed moment in cross-category collaboration. The two brands operate as captains of industry in their respective fields: Bowmore Distillery founded in 1779 on the small Hebridean island of Islay off the west coast of Scotland. Over its 242 year existence it has established itself not only as the oldest, but also as as the most valuable Islay whisky when the distillery’s 54 year old expression, distilled in 1957, sold for £363,000 at Sotheby’s London in 2019.” — Sotheby’s

Whiskey Raiders will watch the auction closely and report on the final value, but one thing is for sure: you’ll need more than just a Goldfinger to afford this bottling – ideally a gold bar or two stashed away if this release is up your alley. Auction listing.