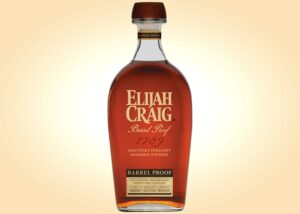 Heaven Hill has announced the release of Elijah Craig Barrel Proof Batch B522, the latest in its Barrel Proof series.

Like previous versions, this batch is non-chill filtered and uncut to preserve natural esters and taste components from barrel to barrel. It’s bottled at 121 proof, a hair stronger than batch A122, which held a proof of 120.8.

The name of the batch is specific to the date it was released. According to Beverage Dynamics, the “B” in the name stands for the second batch in an annual A, B and C line. The “5” denotes the month of May, while the 22 represents the current year.

Each batch has its own qualities, for example, A122 is known to be very sweet and referred to as a “candy bomb.” However, B522 is more balanced between earthy and sweet. Beverage Dynamics describes the whiskey as: “Initial heat dissipates to reveal lots of vanilla and butterscotch balanced with earth tones and oak.”

Elijah Craig Barrel Proof Batch B522 is available nationwide for a suggested retail price of $59.99 per 750-milliliter bottle.