On Monday, Heaven Hill filed a restraining order on their striking employees.  Members of the United Food And Commercial Worker’s Union Local Chapter 23D working at the distillery voted to go on strike on September 10th after contract negotiations broke from scheduling and insurance disputes.  On Tuesday, a Nelson Circuit Court Judge issued the restraining order, limiting the activities of those on the picket line. 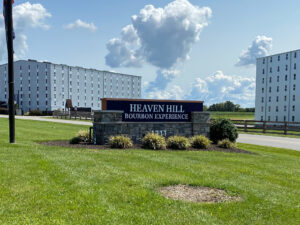 “I think anybody has a right to protest or picket. But we can’t be violating the law,” said Judge Charles Simms during the virtual hearing.  Heaven Hill’s attorney’s alleged that the protestors have been harassing contract workers that cross the picket line and have damaged a worker’s truck by pouring a substance into the gas tank.  The union has denied these claims and believe Heaven Hill is exaggerating the stories to limit the effectiveness of the strike.

“People have a freedom of speech to say what they want to say within the limits of the law,” Simms said

The distillery’s legal team also tried to get the protestors barred from the public road.  Judge Simms did not grant that in the restraining order, but did say that if people were caught on camera impeding traffic or vehicles from being able to enter the facility, he said “Somebody will be held in contempt. Somebody will be paying a big fine.”