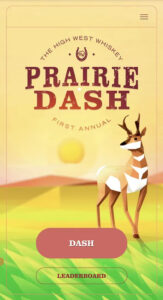 High West has launched a new mobile game in honor of Great Outdoors Month in June.

From the perspective of a pronghorn, players use their thumbs to try and reach 61 miles per hour, the fastest speed of a pronghorn. Players do this during various challenges such as clearing debris and navigating herds of bison.

The distillery will donate $1 to the non-profit American Prairie for every game played up to $50,000. One winner will win a Western experience in Park City, Utah.

High West partnered with American Prairie originally in 2012 to support the organization on its journey to assemble one of the largest nature reserves. When complete, this Reserve will be larger than Yellowstone and Yosemite combined.

“We are committed to celebrating and conserving the beauty and nature of the West, the place we call home, with the launch of Prairie Dash, we’re excited to bring that mission to life and provide both High West loyalists and new brand fans with a chance to take part in the efforts.” Says Daniel Schear, General Manager of High West.