Even with India’s intrinsically anti-alcohol laws, the developing whiskey industry is growing strong. Not to mention, India has a “dark market,” meaning that the promotion and advertising of alcohol are strictly prohibited, which makes any branding nearly impossible.

With all these obstacles in the way, what is spurring on whiskey’s increasing popularity in the country? As it turns out, the rise in demand is from a growing young consumer rate, and believe it or not, the environment aids in creating fantastic whiskey.

For starters, the climate. Typically you would think that the warm and humid weather would make the angel’s share out of control, and it does. “According to Amrut’s head distiller, Surinder Kumar, its barrels in the Bangalore warehouses lose up to a whopping 15 percent a year into the ether.” Says Vine Pair. However, it also aids in another aspect of making great whiskey—the aging process.

The sped-up aging process is due to the heat. It can mature the whiskey at rates that the Scotland environment is not able to. In lamen’s terms, the heat speeds up the maturation process. Meaning India can produce well-matured whiskey much faster than its western counterparts. According to Kumar, “One year of maturing in India would be equal to three in Scotland.” So India can get whiskey out twice as fast.

So what Indian whiskeys are worth picking up? According to USA Spirits Ratings, there are three single-malt whiskeys worth trying, Rampur, Amrut, and Paul John. 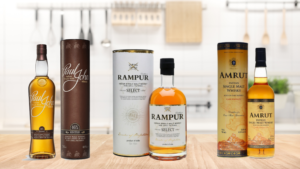 Rampur is aged in the Himalayan foothills and distilled by Radico Khaitan Distillery, which has been around for half a century. This particular whiskey is explicitly made for export, meaning you can grab it from places like Drizly, or Total Wines.

Amrut is an award-winning single malt whiskey, landing itself in Whiskey Bible 2010 and earning the coveted Liquid Gold title.

Paul John Edited Single Malt Whiskey is bottled at 46% ABV. The distillers create it by using both peated Scottish barley and Indian 6-row barley and distilled in the Indian city of Goa.

It’s exciting to see the growth in not only India but globally as well. More and more countries are leaving their mark in the whiskey industry; with creative spins on old classics and new locations discovered for distilling, the industry’s future is wide open, with new choices found anywhere from Kentucky to Mumbai.