WhistlePig recently launched two new products, a rye and a bourbon, under the tagline of “Beyond Bonded.”  These single barrels offerings are the first whiskies to be distilled and aged fully in Vermont by the producer, and they even auctioned off the first barrel of the rye with proceeds benefitting charity.  However, WhistlePig is claiming that the Alcohol and Tobacco Tax and Trade Bureau (TTB) has pulled the approval for the labels and can no longer be distributed and sold.

We bottled our first 100% Farm to bottle whiskey at #100.1 proof but after the whiskey left the Farm, the powers that be rescinded approval of our labels.

40 barrels of Bourbon and Rye are out in the world for sale, but is this the end for #BeyondBonded?#FreeBeyondBonded pic.twitter.com/CxU9NWKV1D

WhiskeyRaiders reported on the approval of the first Beyond Bonded labels when they passed through the TTB back in May.  It raised eyebrows then, as there were several aspects of the label that seemed to go against regulations, such as the proof being labeled 100.1.  While bottlings are allowed a variance of 0.3 proof from the label to the actual whiskey, the Bottled-In-Bond Act requires it to bottled exactly at 100 proof.

Now WhistlePig is trying to turn this into a social media campaign to gain public support to reinstate the label, advertising on Twitter and Instagram and even offering a “Free Beyond Bonded” button with the purchase of a bottle of PiggyBack from their webstore.  But what happens when you dig a little deeper? 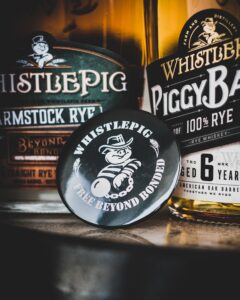 The TTB website is public and transparent with their approval process and any person can search their entire database for labels that have been submitted.  Pulling up the application for the two Beyond Bonded labels shows a status of “Surrendered.”  The TTB defines a status of surrendered as, “Approved’ Certificates will change to this status when the Certificate holder voluntarily communicates to TTB that they no longer need the Certificate.”  That sure sounds like WhistlePig asked for the label to be pulled themselves and are now trying to spin it that they are the victim, and artificially building hype on their own product.

Now, it is possible that the TTB asked the distillery to make changes to the label (which wouldn’t be disclosed publicly), but why wouldn’t they just make the changes rather than think they are above the regulations?  They were already disingenuous with submitting the label, and now it seems like they are disingenuous with it’s removal. Until they clear it up, don’t give in to their marketing and feel like you need to go out and hunt for a bottle.