In March 2021, Lexie Phillips made history by becoming the distillery’s first female assistant distiller. However, her work doesn’t stop there. She is also working with their master distiller Chris Fletcher on many whiskey quality and innovation projects. 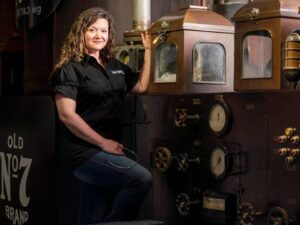 The first product to hit the shelves from the duo is a Jack Daniel’s whiskey with an age statement.  It will be a whiskey aged 10 years, bottled at 97 proof, and $70 a bottle. “I am so so so excited, along with Lexie and our team, to be able to recreate something from our past literally,” Fletcher said. “This is about honoring what Jack himself did. To our knowledge, this [making age statement whiskies] has not been done since Jack was alive.” As stated in Forbes.

The 10-year-old age statement whiskey will be an annual limited release. It is all a part of Phillips and Fletcher’s plan to expand the brand, with multiple releases offering different age statements.

Forbes also stated, “Both Fletcher and Phillips have a deep sense of how much history and the Jack Daniel’s brand means. Fletcher grew up in Lynchburg, and his grandfather, Frank Bobo, was the head distiller from 1966 to 1989. Phillips grew up just outside of Lynchburg and had, at last count, 24 family members who have worked or work at the distillery or in a job related to it. When she moved into her new office, her dad called — but she hadn’t given him the number. He remembered it from calling her grandmother back in the 1960s.”

The pair is working on whiskey releases that will debut as far out as 2030 and beyond. With Jack Daniel’s expanding it looks like the brand’s future is bright and definitely female.