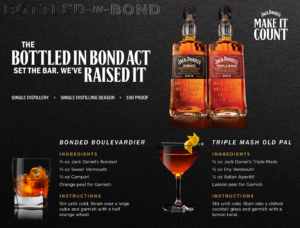 Looking for a new whiskey to add to your collection? Look no further than the Jack Daniel’s Bonded Series.

The Distillery has introduced two new expressions – Bonded Tennessee Whiskey and Triple Mash Blended Straight Whiskey. Both are Bottled-in-Bond at 100 proof (50% abv) and come in packaging inspired by the original design of the 1895 Jack Daniel’s Tennessee Whiskey bottle.

Introducing Jack Daniel’s Bonded and Jack Daniel’s Triple Mash. Every time you open the bottle it feels like an event. One you can attend whenever you want. #JackBonded #JackTripleMash #JackDaniels
Learn more and order a bottle today @ https://t.co/vQuELvshWs pic.twitter.com/Za2bLuZPgo

“The Jack Daniel Distillery has been making exceptional American whiskey to the highest standards for generations, before and after the Bottled in Bond Act, dating back to the days of Mr. Jack himself,” said Chris Fletcher, Jack Daniel’s Master Distiller. “Jack Daniel’s Bonded and Triple Mash are a nod to our heritage with a touch of innovation and craftsmanship. These whiskeys are another opportunity for both our friends and new drinkers to explore and discover everything Jack Daniel’s has to offer.”

Jack Daniel’s Bonded is Jack’s time-honored recipe of 80% corn, 12% malted barley, and 8% rye. Business Wire describes it as a big, bold Tennessee Whiskey at 100 proof with layered notes of caramel, rich oak, and spice giving way to a pleasantly lingering finish. It finishes with hand-picked barrels with a deeper color, flavor, and aroma profile than Jack Daniel’s Old No. 7. These barrels give the spirit a darker, richer, and more oak-forward character.

Jack Daniel’s Bonded and Triple Mash will be available this month, with international markets later this year. It will initially be available in 700mL bottles for suggested retail prices of $29.99 and $32.99 respectively.