In a Move That Will Excite Whiskey Nerds, Jameson Finally Stops Watering Down Iconic 18 Year Old Whiskey to Legal Minimum 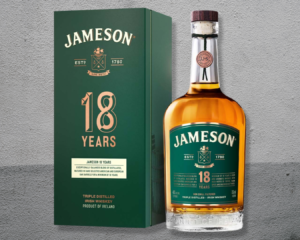 Jameson Irish Whiskey this week announced that its 18-year whiskey is getting a make-over inside and out.

In a move whiskey aficionados will greatly appreciate, the brand is giving the upscale whiskey’s proof a 12-point bump. The ABV of Jameson 18 Years has been increased from 40% to 46%, removing the need for chill-filtration and resulting in a whiskey with a richer mouthfeel and more depth of flavor.

This change is aimed at keeping the whiskey interesting to both connoisseurs and novices alike, with an alcohol content high enough to appease more versed whiskey fans while still not being too overwhelming to consumers new to the spirit.

By keeping the alcohol content high but not too high, the whiskey will be more palatable to those new to the drink while still providing a smooth, flavorful experience for those who are well-versed in the taste of whiskey.

With sustainability in mind, Jameson 18 Years is also ditching its wooden presentation box and will now be presented in a lightweight, fully recyclable cardboard box with foil accents. The new packaging will feature a scannable QR code that will direct Jameson fans to a virtual guided tasting hosted by Master Distiller Kevin O’Gorman.

Jameson 18 Year will be available at retailers and bars in the next couple of months. The suggested retail price is €200 (about $211).