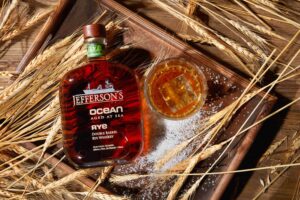 The world’s first rye that’s been aged at sea is Jefferson’s 26th release of “Oceans: Aged At Sea”, which is also the brand’s first rye release.

The voyage took the whiskey over two years to complete, sailing from Scotland to Canada and then down to New Orleans. Master Blender Trey Zoeller has been quite excited about this release, as it is a milestone for Jefferson’s.

When discussing the process, Jefferson’s founder And whiskey innovator, Trey Zoeller, said, according to Bourbon Review: “The unpredictability of the ocean and the way it affects our products has always been intriguing to me. This, combined with our double barreling process, made for a more robust profile, while the increased interactions with barrels and fluctuating air temperatures balanced the spice of rye. This aging process churns and treats our whiskey like no rickhouse could,”

Introducing: Jefferson’s Ocean Aged At Sea Rye Whiskey. The first rye whiskey of its kind, double barrel aged in new char and toasted barrels before being placed on ships to age at the mercy of the sea creating a bold yet balanced flavor unlike anything we’ve explored before. ⁣ pic.twitter.com/74mtnQHy7w

#26 features a fully mature rye whiskey that was double-barreled in 75% char 3 casks and 25% toasted barrels. It was then loaded onto ships – a process that is unique to Jefferson’s whiskey in and of itself – and taken to ports all across the world as part of the Ocean series’ distinct finishing process.

When it comes to flavors, Zoeller shares that “As with Jefferson’s Ocean Aged at Sea® Bourbon, the caramel notes in the whiskey will be amplified due to the constant motion in the barrel and fluctuations in air temperature. Salt will also be present from exposure to the sea air. Ultimately, aging at sea will balance out the spice of the rye to deliver a truly complex whiskey.”

Currently, the rye is available for preorder from ReserveBar, with an MSRP of $93.