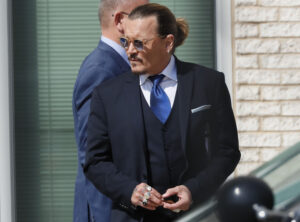 Johnny Depp steps outside court during his civil trial at Fairfax County Circuit Court on April 25, 2022 in Fairfax, Virginia. Depp is seeking $50 million in alleged damages to his career over an op-ed Heard wrote in the Washington Post in 2018. (Photo by Paul Morigi/Getty Images)

The ongoing defamation trial between Johnny Depp and Amber Heard has captivated the world as the details of the two star’s tumultuous relationship have unfolded.

The latest news in the case revealed Amber Heard had quite the wine habit, spending over $160,000 on wine in just under two years. This is according to Johnny Depp’s former business manager, Ed White. In court, it was revealed that Heard had a specific preference for Vega Sicilia wine, an extremely prestigious Spanish label, according to BBR.

This new statement by White backs up an earlier claim made by Depp that Heard would drink two bottles of wine a night, costing the actor $30,000 per month to foot her wine bill.

Since their divorce, Depp’s wine expenditures have dropped to practically nothing, since he says he does not enjoy wine like his ex-wife did.