‘Every Day I’d Come Home There Would Be a Glass Of Whiskey Waiting For Me’: Johnny Depp Describes Drug, Alcohol Use in Trial Against Amber Heard

All eyes have been on the trial between Johnny Depp and Amber Heard. In the lawsuit, Depp is accusing Heard of defamation of character for an article she wrote for the Washington Post, where she refers to herself as a “public figure representing domestic abuse.” Depp’s attorneys said it indirectly refers to abuse allegations she made against him during their 2016 divorce.

During the trial, multiple photos were presented to the court depicting Depp’s drug and alcohol abuse over the years. One showed a shot of whiskey next to other paraphernalia. 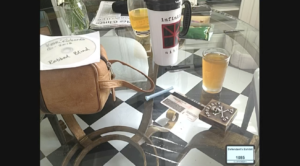 The image in question during the hearing.

On the stand April 21, Depp described his use of drugs and alcohol at the time, saying, “I’d fallen off the wagon when I was doing ‘Lone Ranger,'” adding that, “Every day I’d come home there would be a glass of whiskey waiting for me.”

The photo also showed what appeared to be lines of cocaine. When asked whether it was indeed cocaine, Depp replied: “I would assume.”

Depp calls Heard’s accounts of his drug use as “grossly embellished” and said there were no moments where he’s been out of control.

Depp admitted to an addiction to pain medication after he suffered an injury on the set of the fourth “Pirates of the Caribbean” movie. He said he fluctuated between drug use and long periods of sobriety over the years.

Depp also has denied accusations of violence against Heard, saying, “Violence isn’t necessary. Why would you hit someone to make them agree with you?”