Know Your Bourbon: 1897 And The Bottled In Bond Act | Whiskey Raiders
Article

Know Your Bourbon: 1897 And The Bottled In Bond Act

If you enjoy drinking American Whiskey, you’ve probably seen bottles labeled “Bottled-In-Bond,” from big producers like Heaven Hill with their brands like Henry McKenna, Evan Williams White Label, and Old Fitzgerald, to craft producers like New Riff and Wilderness Trail.  The designation though goes far further than just simple marketing, as the protected term has deep and important roots in the history of American distillation.

Prior to the 1900s, production of whiskey in the United States was strong and prevalent.  But with its success, came producers looking to capitalize on the popularity any way they could.  Despite whatever the labels would say, makers would modify their products with additives to give their whiskey added flavor and color to try and entice consumers while providing little to no transparency.

Not everyone in the industry was willing to sacrifice their integrity to make money, though.  Col. Edmund Haynes Taylor Jr., creator of the Old Taylor bourbon brand and namesake for Buffalo Trace’s E.H. Taylor brand, headed a coalition to establish legal protections to guarantee a level of quality in the country’s native spirit.  Working with the Secretary of the Treasury, John G. Carlisle, they were able to get the Bottled-In-Bond Act of 1897 to pass through legislature and signed into law on March 3rd of that year. 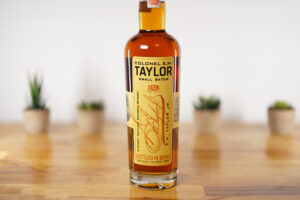 In order to be labeled “Bottled-In-Bond,” distilleries had to follow explicit regulations.  These were:

1). Composed of the same kind of spirits produced from the same class of materials

3). Must be aged for at least 4 years in wooden containers in a Federally Bonded warehouse

4). Unadulterated from it’s original condition or character (filtration being allowed as long as it does not add substances)

These regulations were upheld by Treasury agents who would have access to the bonded warehouses to ensure the practices were being followed.  The law also provided tax incentives for distilleries to produce BiB whiskey.  This meant that rather than the word of the distillery or their marketing, the U.S. Government became the guarantor of the quality of the whiskey.  The Bottled-In-Bond Act therefore became the first Consumer Protection Act to be passed in the United States.

While Col. Taylor pushed the act in order to protect Bourbon, the law actually covers nearly every category of spirit.  Rye whiskies, Brandy, Rum, and Corn Whiskey can and are produced with the same regulations.  Even Vodka and Gin can be labeled Bottled-In-Bond, but the former needs to be aged in paraffin or similar substance to prevent interaction with the wooden container, while the later can only be aged in paraffin lined or unlined wooden containers.

The passage of the Bottled-In-Bond act paved the way for more laws establishing the U.S. Government as the confirming body to make sure customers were buying the products advertised.  The Pure Food and Drug act would be passed in 1906, and shortly after that, President Taft would legally define “Straight Whiskey” as we know it today.  In 1964, “Bourbon” became defined and recognized as a uniquely American product.  While some producers like to stick to the older ways of production and marketing, or try to push the limits of labelling regulations, these laws have shaped the whiskey we love to drink today with high standards that have earned respect throughout the world.