Bar Offers ‘F*** Putin’ Shots After Dumping All of its Russian Vodka, Replacing it With Ukrainian Booze 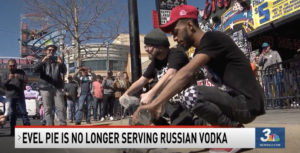 In response to the Russian invasion of Ukraine, a popular restaurant and bar in downtown Las Vegas is replacing its Russian vodka with Ukrainian booze.

Evel Pie began pouring out its inventory of Russian vodka Friday morning and replacing it with Ukrainian vodka.

According to Channel 3 Las Vegas News, the restaurant also offered a special promotion Saturday. Honey-pepper “Fuck Putin shots” are selling for $5, with all proceeds going to the International Committee of the Red Cross and Chef José Andrés’s World Central Kitchen, which is at the border providing meals for refugees.

“I hope that all Americans can agree that we support democracy and we support people to have the right to determine how things are in their own country,” said Eric Gladstone, Evel Pie spokesman.

Evel Pie employees are encouraging other bars and restaurants to follow their lead and remove Russian vodka from their menus until the Ukraine crisis is settled.

On Sunday, Evel Pie shared on Facebook that 10 cases worth of its Ukrainian vodka shots had sold within the first 24 hours of the promotion.