Better known as one of the greatest guitar players of all time, John Petrucci has entered the whiskey scene making the coolest bourbon around.

John Petrucci has collaborated with Iron Smoke Distillery. The pair created an extremely limited batch of straight bourbon whiskey called Rock the Barrel. Marrying his rocker roots to his passion for a great dram. Iron Smoke Distillery will release the bourbon on May 3rd, 2021.

“As soon as I tasted Iron Smoke’s Cask Strength, I knew I wanted to partner with this distillery,” says Petrucci of the collaboration. Everything about the contents in the bottle was handpicked by Petrucci himself from the thousands of barrels at the distillery in Fairport, NY.

I’m so excited about Rock The Barrel, my bourbon whiskey made in collaboration with Tommy, Drew and the whole talented team at @IronSmoke!

It will be released in an extremely limited batch on May 3rd, 2021 at 12:00PM EDT online (available in the United States only). pic.twitter.com/qlRuzz9wKD

Because this is such a limited release, there is a limit of two bottles per customer (retailing at $200 per bottle). Each purchase comes with a limited edition “All Access Laminate,” including a unique, redeemable merchandise code. The laminate also allows purchasers exclusive access to a live tasting with John Petrucci of Dream Theater, and Tommy Brunett, CEO/Co-founder of Iron Smoke Distillery. According to the Iron Smoke Distillery Website.

However, the steep price tag is worth it, with Forbes hailing it as one of the “10 Best Bourbons Beyond Kentucky” and the bourbon earning a 95.5 from Jim Murray’s Whiskey Bible. 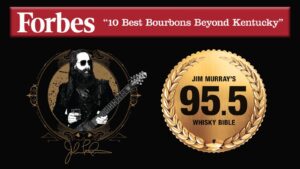 Awards and accolades for rock the barrel bourbon. Image via Iron Smoke Distillery.

A Smokey, Cool Whiskey For The Rocker In All Of Us

The bourbon does not only boast a cool rockstar exterior. It delivers with a unique flavor profile. “All killer, no filler” as the distillery describes it. The lucky few who get their hands on a bottle can expect a pure and unfiltered cask strength, 120 proof bourbon whiskey.  It perfectly combines its strength and smoothness with hints of applewood smoke sweetness.

Whiskey Raiders got to chat with Rachel Nicole, a rep for the distillery, and she said “The bourbon is so unique and has all of the lingering smoke flavor of our casket strength (my personal favorite), but it has more notes of caramel and lots of cinnamon. The bourbon is as unique and alluring as the collaboration itself! I love that Tommy (ISD owner), coming from a rocker background, came together with a fellow musician for such a badass collaboration! It’s not every day that you see something like that.”

“Here’s to righteous music in your ears, whiskey warmth in your belly, and endless good times in your soul. Whiskey up!” -Iron Smoke Distillery

Need another bourbon to sip while staying up to date on the latest whiskey news? Check out the bourbon list only found on Whiskey Raiders.