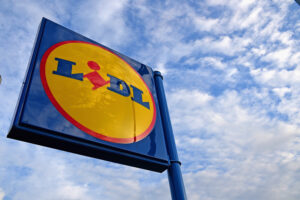 A general view of a Lidl supermarket on Oct. 29, 2014, in Glasgow, Scotland. Graeme Fyfe, 47, attempted to steal seven bottles of booze after breaking into a grocery store by using a pickaxe. (Photo by Jeff J. Mitchell/Getty Images)

In a scene reminiscent of an episode of Trailer Park Boys, police in Aberdeen, Scotland, caught a burglar in the act of stealing seven bottles of booze after he broke into a supermarket with a pickaxe.

Graeme Fyfe, 47, was attempting to steal seven bottles of vodka from a Lidl grocery store when he triggered the store’s burglar alarm. Police arrived on the scene to find Fyfe still inside the store, gathering the liquor. Officers also discovered a pickaxe next to a shutter door that Fyfe had damaged as he broke in.

According to the Press and Journal, defense agent Lynn Bentley said her client had a “long-running problem with drugs, but never alcohol”. She continues to say, “He’s at a loss to explain why he behaved in that way, other than he had consumed non-prescription Valium.

“It’s bizarre behavior to go into a well-secured premise with an alarm system and, almost inevitably, it resulted in him being caught. The pickaxe was not to be used in any way as a weapon. It appeared to have been used to gain entry to the building.”

The court ordered Fyfe to be supervised for 12 months and imposed a three-month curfew.