Man Arrested After Drinking in Liquor Store He Crashed Into
Article 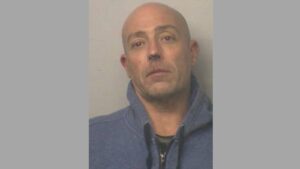 John Bacigalupo, 54, of Revere, Massachusetts, was arrested and charged with aggravated assault and battery on a police officer, breaking and entering, larceny, malicious property damage and resisting arrest after crashing into a liquor store and remaining there.

On Saturday morning, Stoneham police were dispatched to Rapid Liquors on Main Street after a burglary alarm was triggered. When they arrived, they discovered that the door of the business had been smashed into by an abandoned vehicle that was left running. When authorities got inside, they discovered John Bacigalupo smoking a cigar, eating potato chips and drinking beer he had just stolen off the shelves.

According to MassLive, “Two officers responded using their taser three times, but it had no effect, McIntyre reported. They then attempted to take Bacigalupo into custody, which resulted in a struggle. He is accused of hitting an officer in the face and causing merchandise to fall from the shelves.”

Officers said Bacigalupo refused to leave the store, said he had a firearm and repeatedly sai the officers needed to shoot him.

According to reports, Bacigalupo opted out of medical treatment and was taken to the Stoneham Police Station, where he is being held on $100,000 bail.