It’s no secret that the world loves a good April Fools joke. Or did, rather, back when they were creative and fun. In recent years, the world at large has grown tired of flashy but flimsy corporate “pranks”. These are typically fake product announcement that mock releases and highlight features, bugs or quirks of an industry. For a great many years, the whiskey industry was largely immune to this.

The Glenlivet released “Scotch Pods” during the height of the Tide Pod phenomenon, but this ended up resulting in a legitimate product that came to market. Few were made, but Pernod Ricard’s stunt paid off. All across the internet, the new release gave Glenlivet all manner of hefty attention from consumers. Consumers reacted both in praise and bewilderment. Undoubtedly, any press is good press in the whiskey marketing game.

Scotch based cocktails tucked in a consumable pod are certainly one thing, but George Dickel upped the ante in a release nobody expected at the time. The George Dickel Tabasco release was initially announced in 2018. It quickly became the presser many assumed at the time was an April Fools joke to be. Dickel started advertising a Bourbon whiskey distilled in Tennessee and finished in genuine Tabasco hot sauce barrels. To be honest, that was something we also didn’t really know existed at the time.

Unbeknownst to all but Tabasco’s most dedicated fans, the hot sauce is blended to a peppery mash and aged in bourbon barrels for three years. It’s kind of crazy to realize how much overlap a young young bourbon and Tabasco may have, but crazier even still to see them directly come together.

George Dickel Tabasco weights in at 35% ABV – making it a flavored whiskey rather than a Bourbon or straight whiskey, but the character of the hot sauce is unmistakable. Its actual arrival to market stunned many: the crazy idea was actually developed into a bottling destined for consumers bars and kitchens. 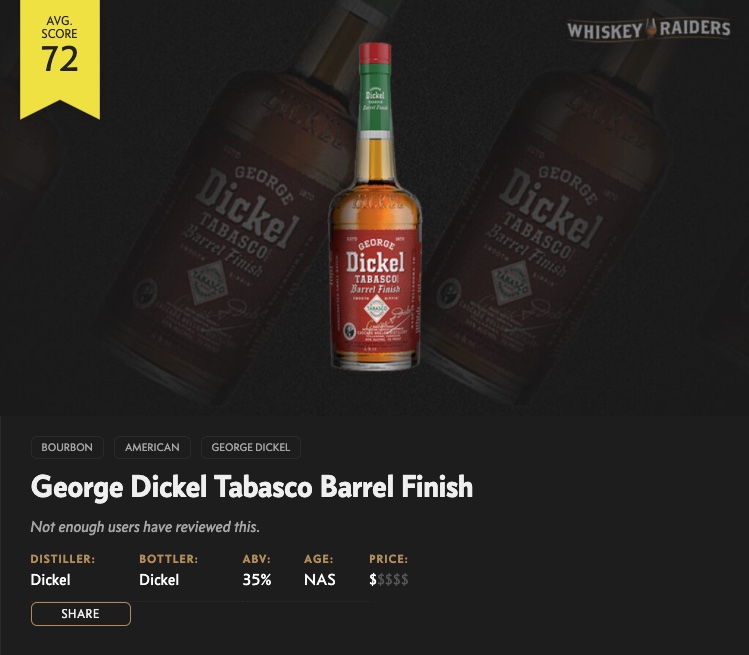 Here at Whiskey Raiders, we gave the hot sauce / whiskey crossover a taste. Like many others, the notable takeaway was that the whiskey was far better than expected, with the hot sauce much more meek and integrated than expected, but overall the base whiskey wasn’t particularly great. All in all, the release isn’t a total bust, but it’s novelty can’t be understated. Few will want a second glass, even if they don’t spit out the first.

If you haven’t picked some up yet, there are bottles occasionally available at retailers across the United States. If nothing else, George Dickel Tabasco is probably the most interesting novelty bottle of whiskey released so far, and makes one hell of a talking point as a bottle on your bar.