Recently, I had the opportunity to sit down with Uncle Nearest’s Victoria Eady Butler, the first known black woman to become a Master Blender, all thanks to her great-great-grandfather, Nathan Green.

Founded by Fawn Weaver, Uncle Nearest is a highly regarded new whiskey, and for a good reason. It was the most awarded American whiskey or bourbon of 2019 and 2020 and landed a spot on Oprah’s coveted Favorite Things List in 2020.

This all woman leadership team is kicking but and they’re just getting started.#WomensHistoryMonth #TNwhiskey https://t.co/S7a6ZzEdOw

The credit for the successful, or as some would say, legendary flavor, all goes to the master blender, Butler. Butler did not enter the whiskey scene until 2018, when she retired from her job as an analytical manager and the next week went to work for Uncle Nearest. Weaver’s initial plan was to have each batch of 1884 Uncle Nearest whiskey be blended by one of Nearest’s descendants, and Butler was the first to step up to the plate.

Jokingly referring to herself as an “Uncle Nearest Purest,” her blending and tasting style stem from her signature rule of not drinking any other kind of alcohol or spirit (accept the occasional cold beer). She also avoids eating anything before sampling the Nearest spirits to maintain her palate for the whiskey. Part of her reasoning, however, is simply that Uncle Nearest is a great whiskey; why drink anything else? 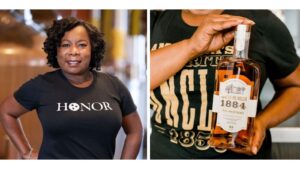 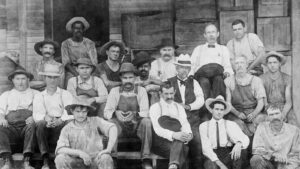 Jack Daniel’s pictured with Nearest Green’s son, George Green. Jack is in a black vest and white hat, and Green is to his immediate right, in the center of the photo.

Green was also responsible for teaching Daniel the “Lincoln County Process,”  which is a step in the process of making Tennessee whiskey where the whiskey is filtered through charcoal before going into casks for aging.