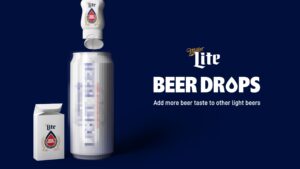 If you think “beer enhancement drops” are an absurd idea, the joke’s on you, because Miller Lite’s newest product sold out just hours after its release.

Just in time for National Beer Day (April 7), Miller Lite its “Beer Drops”, so every light beer can taste more like Miller Lite. Ignore the fact that you could achieve this by, you know, just buying Miller Lite.

The beer company said the drops are a “liquid taste enhancer that adds more beer taste to other light beers.”

“One thing we know to be true, Miller Lite lovers absolutely love the taste of beer,” said Sofia Colucci, global VP of the Miller family of brands. “We see Beer Drops as a fun yet competitive extension of our new campaign to highlight what sets us apart. National Beer Day is the perfect moment to celebrate the great taste that has made Miller Lite special since 1975.”

The drops are a small part of a larger campaign the brand is pushing, with the message that light beer shouldn’t taste like water.

Colucci also said Miller Lite has “remained true to itself while other light beers have diluted what we’re all about. We know there’s a practical side to why people love Miller Lite, and that’s because it’s a light beer that embraces the taste of beer. But at the same time, there’s an emotional component – it’s that first-sip feeling that ‘Miller Time’ represents. We’re blending these two pieces of our history for the next generation, and we couldn’t be more excited about it.”

The drops will be available again on Miller Lite’s official website for $4.07 on Thursday, but only while supplies last — which, if Wedensday is any indication, won’t be long. It might be a good idea to check out the site first thing in the morning if you want Beer Drops.

Whether you’re a fan of light beer or not, it’s hard not to appreciate a good marketing gimmick when you see one, and Miller Lite has definitely delivered with these beer enhancement drops.

Miller has absolutely killed the marketing game over the past four months or so. Between the Miller High Life gingerbread dive bar and Miller Lite “Beernaments” for the winter holidays, the “Meta Lite” bar in the Metaverse for the Super Bowl and now Beer Drops, Miller is the pinnacle of marketing right now in the alcohol world.