July was a busy month for new whiskey releases, with several distilleries debuting expressions or bringing older bottlings back to the market. Here’s a round-up of some of the most noteworthy whiskeys released last month. 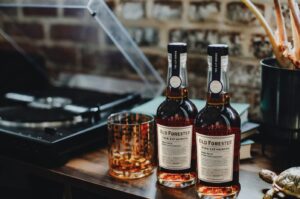 Old Forester Whiskey Row Fire has been bottled at 100 proof and is exclusively available for $59.99 in limited quantities from the Distilling Company’s retail shop. 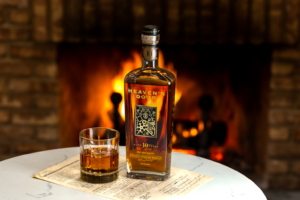 The limited-edition release has a suggested retail price of $99 and is now available for preorder at ReserveBar.com and select retailers nationwide. 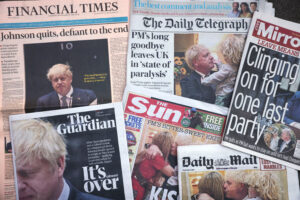 The Big Lie is a new whisky bottling by Caskshare, and the name takes aim at the disgraced British Prime Minister Boris Johnson.

Caskshare is cleverly touting this bottling as “The perfect whisky for your Cabinet” – “cabinet” working as a double meaning for both a liquor cabinet and the United Kingdom government’s decision-making body.

This is likely a nod to Johnson’s alleged drinking and partying. More specifically, his infamous “bring your own booze” party during the COVID-19 lockdown, where he invited more than 100 guests to party while the rest of the world was in quarantine. 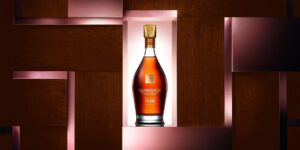 This month, Scotch whisky distillery Glenmorangie unveiled Glenmorangie Grand Vintage Malt 1998, crafted by Dr. Bill Lumsden, Glenmorangie’s director of whisky creation. In 1998, Lumsden decided to allow new charred oak casks to burn out heavily before being used to impart “an intense color and spice” to the whisky, according to Glenmorangie.

“When I started in 1998, I had endless ideas for new and delicious whiskeys,” Lumsden said in a news release, according to Whisky Experts. The aging experiments in new, carbonized oak casks were one of the first with the Glenmorangie Grand Vintage Malt 1998. The result opens a new dimension of Glenmorangie elegance.”

The result is a rich and complex spirit that is now available in limited stores at a suggested retail price of €800 ($807). 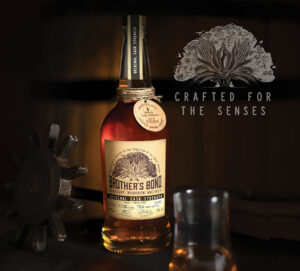 Brother’s Bond Bourbon, the brand founded by “The Vampire Diaries” stars Ian Somerhalder and Paul Wesley, released a new cask strength whiskey last month. The limited edition expression has been bottled at 57.9% ABV and is available for preorder on ReserveBar, priced at $80 for a 750-milliliter bottle. The bourbon has earned a Gold medal at the 2022 San Francisco World Spirits Competition.

This is Brother’s Bond’s second release after their inaugural bourbon’s success in 2020. This new expression has been aged for two years in new American oak barrels before being bottled “uncut and unfiltered.” 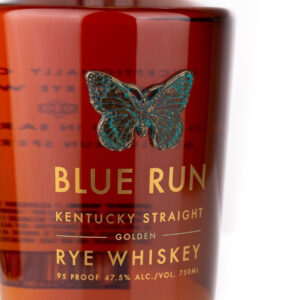 Blue Run Spirits, a newcomer to the whiskey scene, released its 10th whiskey. This latest batch, bottled at 95 proof and coming from 102 barrels, is available now at a suggested retail price of $99.99.

The brand has earned a stellar reputation in just its short time on the market, due in part to its unique origins. Blue Run was founded by a politician and former Nike designer — not exactly the usual suspects when it comes to whiskey companies. But this unlikely duo has managed to produce some of the most impressive whiskey imaginable.

The brand’s first release, Batch 1, sold out almost immediately after its September 2021 debut and went on to win a Gold Medal at the San Francisco World Spirits Competition. 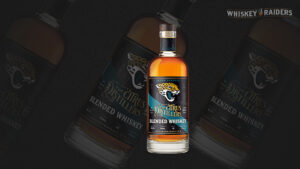 For the second year in a row, Jacksonville, Florida-based Citrus Distillers is releasing a whiskey bottle commemorating its local NFL team, the Jacksonville Jaguars.

The 2022 limited-edition Jaguars whiskey is made with a 100%-corn mashbill and bottled at 93 proof. The product is a small batch whose run will be limited to about 4,500 bottles and is available for $41.99 online at the distillery’s website. 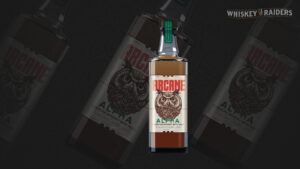 Arcane Distilling, a distillery based in Brooklyn, New York, has released its flagship whiskey, Arcane Alpha. The whiskey is distilled from a triple IPA and bottled at 83 proof.

According to the brand, the whiskey has tasting notes of “the intense aromas of Cascade and Mosaic hops, balanced by light malt notes and a mild oak finish.” 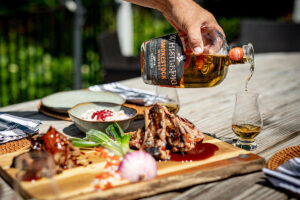 WhistlePig SmokeStock Wood Fired Whiskey, made in collaboration with Traeger Grills, was introduced this month by Vermont distillery WhistlePig.

The limited-edition whiskey is praised as “the ultimate whiskey for the backyard bartender.” Smoked with Traeger’s Apple barbecue wood and Aged in American Oak No. 3 char barrels, the brands say consumers can expect campfire smoke and subtle savory notes. 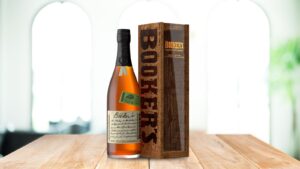 “The Lumberyard Batch” is the second Booker’s Bourbon expression of 2022, and it is a seven-year-old bourbon that was created to honor the life of the distillery’s founder, Booker Noe.

The bourbon is named in honor of the lumberyard that Booker worked at during his pre-distillery years. While his time there may have been short, it helped shape the solid work ethic and curiosity that he was known for throughout his career and life. 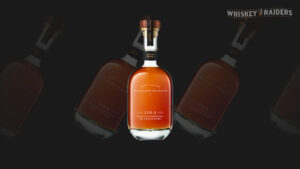 Woodford Reserve’s Batch Proof Series is an annual bottling released at a higher proof than the brand’s standard 45.2% ABV. This particular bottling takes Woodford Reserve’s trademark flavor range of sweet vanilla and toasted oak to a new level, offering a taste of the whiskey in its purest form.

This bottle is in celebration of Master Distiller Chris Morris and Assistant Master Distiller Elizabeth McCall. The bottles will be 118.4 proof and are made using the same grain bill and process, ensuring a high level of quality control. 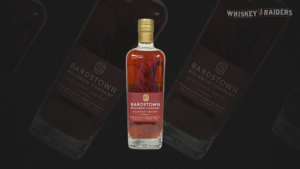 Bardstown Bourbon Company has announced its newest release, Discovery #8. This release is a blend of Kentucky bourbons, two Indiana rye whiskeys and an aged Canadian whiskey, making it complex and the most rye-forward release of the Discovery Series to date.

The batch was matured with a custom selection of oak staves, giving it a unique flavor profile. It is bottled at 114.1 proof and will sell at a suggested retail price of $139.99. 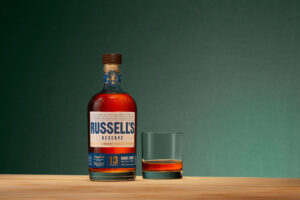 The new Russell’s Reserve 13-Year-Old Bourbon is now the oldest expression of its core range. The initial release of this much-anticipated bourbon sold out quickly in 2021, with many whiskey enthusiasts declaring it a “once in a lifetime” find. The bourbon was ranked as the best of 2021 by Fred Minnick, a well-respected authority on whiskey.

Given the rarity and acclaim of this bourbon, it’s no surprise that it has been listed for as much as $800 on secondary markets. 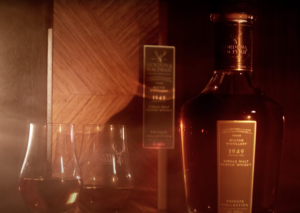 Gordon and MacPhail released the last cask laid down in the 1940s from Scotland’s Milton Distillery, known today as Strathisla. This is the oldest and last single malt to be released by Gordon & MacPhail under the Milton name.

There are only 180 bottles available worldwide, making this release ultra rare. The bottling uses the distillery’s original name, given by founder George Taylor, as an homage. It is one of few releases ever to bear the Milton name.

Gordon and MacPhail 1949 from Milton Distillery retails for £50,000 ($60,264), making it one of the most expensive bottles of single malt ever released. 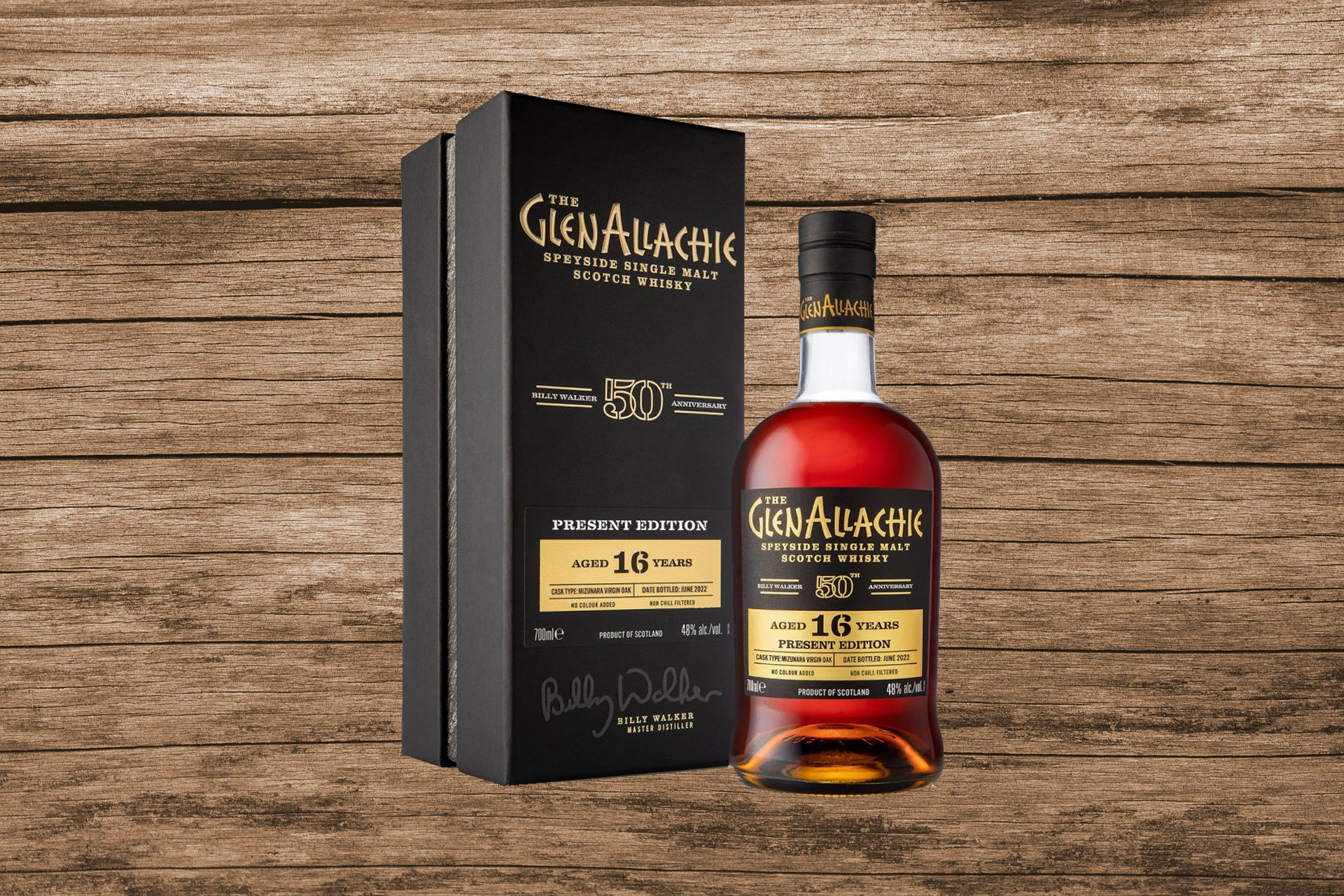 The latest addition GlenAllachie’s Past, Present & Future Series is the Present edition, which features a 16-year-old whisky finished in Japanese Mizunara Oak. This release marks Walker’s first use of Mizunara, and it retails for £280 ($337).

The whisky was bottled at 48% ABV without added coloring or chill filtration, the release is limited to 2,900 bottles. 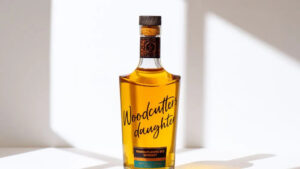 This “transatlantic” rye combines American and British whiskeys from a Surrey-based distillery named Silent Pool. The identity of the American distillery joining forces with it has not been revealed; however, we know that it is located on the East Coast.

Only 1,000 bottles will be sold exclusively through the Silent Pool Distillers website starting August 1. The Woodcutter’s Daughter is now available for pre-order retail price of £65 ($79).