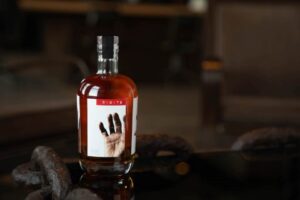 The former NBA champion, All-Star, Hall of Famer, and Olympic Gold Medalist Scottie Pippen has decided to join the ranks of fellow celebrities in jumping into the bourbon boom by releasing his own whiskey brand, “DIGITS.”  Working with Savage and Cooke distillery out of California, DIGITS is a 5-year old bourbon whiskey that will be exclusive to the Chicago market.

It’s hard to tell whether Pippen decided to enter the bourbon world to try and capitalize on the consumers willing to buy anything labelled bourbon, or a genuine love of the spirit. On one hand, the front label only consists of a picture of his hand, the press release is filled with basketball puns, and the release of the bottles has been paired with autograph sessions.  This comes well timed as Scottie also tees up a new book launch.

It’s worth noting that Pippen also spent time actually doing the dirty work at the distillery, working with a whiskey producer that isn’t MGP. The famous baller is on the record stating: “I’ve always celebrated with bourbon, now getting to celebrate with my own is something very special to me.” This is, even if just for show, something we don’t see often. For instance, the big names behind Sweeten’s Cove: Peyton Manning, Andy Roddick and Jim Nantz are just investors or brand ambassadors in visage alone: the real work behind the release comes at the hands of genius blender Marianne Eaves.

Strangely, the press release mentions very little about the actual bourbon which makes it hard for enthusiasts to get excited about it.  We know it’s 46% ABV and 5-years old, and Alissa Fitzgerald (Forbes) says it is, “…clean with hints of caramelized brown sugar and smooth from start to finish.”  Hardly anything to go off of or set it apart from the hundreds of other bottles readily available on the shelves.  Especially since Pippen worked side-by-side with Dave Phinney, the maker of “The Prisoner” wine brand, it seems like some sort of interesting wine finish on the bourbon could have been a natural fit and make it unique.  Instead, more of the press and marketing are focused on Pippen’s status and likeness, which will likely work in having the bottles sell out in no time.