Craft Irish Whiskey Co. has set another world record for the most expensive whiskey collectors set in the world, Emerald Isle.

Ian Duignan, Managing Director, stated, “The sale marks another milestone on our journey to become the world’s leading ultra-luxury whiskey. The pioneering partnership with Fabergé has allowed us to commission the first Celtic Fabergé Egg the world has ever seen, paying homage to the Isle of Ireland.” 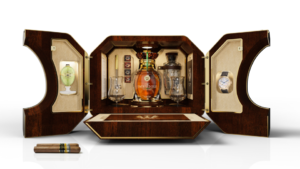 Each box is inspired by the shape of an emerald and inspired by the ‘wonders’ of Ireland and includes the geographical coordinates. The included Fabergé Celtic Egg is handcrafted from 18k yellow gold and features Fabergé’s legendary guilloché enamel in green, white, and gold. The colors of the Irish flag.

The Emerald Isle Collection’ also the oldest triple-distilled Irish whiskey in the world. However, it is not the company’s first whiskey to break a world record. Their 29-year-old, triple-distilled, single malt whiskey called Devil’s Cut sold for $60,000 in November 2020. Winning the title of the most expensive inaugural release.

As part of the sale, all the proceeds are donated to the Correa Family Foundation, a nonprofit that supports children affected by cancer and a charity near and dear to the founder’s heart. According to their website, the foundation helps cover daily expenses, including food, transportation, and rent, for over 15,000 children with cancer. They even provided gifts to patients and their siblings during the holidays.

“I am also delighted and proud to be able to donate the full proceeds of this sale to the Correa Family Foundation, a cause which is very close to my heart as my own daughter was diagnosed with Neuroblastoma, a rare form of cancer when she was just five-months-old. Thanks to the charities like the Correa Family Foundation, she is now a healthy 19-year-old and I am honoured to be able to support the foundation through this contribution.” Says Jay Bradley, Founder, The Craft Irish Whiskey Co.

Want more Irish Whiskey? We’ve got all the information you could ask for; find it all here.