Instagram is typically a bastion of information, fun and occasionally great charity within the whiskey industry. At the very least, it’s a great place to get an idea of new bottles that are coming, just announced, or releasing. People are always posting bottle shots, as it’s known in the zeitgeist, and it’s usually harmless.

Occasionally, it’s also quite the opposite.

On August 2nd, notable Instagram whiskey account @alildabofbourbon noticed a new bottle on shelves. The whiskey? Well, not a typical whiskey at all. The bottle in question was Slapdick ‘Agave Whiskey’. Which was hardly a question – her post simply noted it existed and was new.

For the rusty – Whiskey is a spirit made from distilled grain. That can be corn, barley, rye or wheat – certainly not Agave. Agave is an entirely different sugar source, native to Mexico and other similar climates (Chile, Texas, etc). Agave is used to produce Tequila, destilado, and Mezcal. Most importantly, it’s not a grain. How could the TTB allow an ‘Agave Whiskey’ to come to market (hint, it’s a whiskey flavored with agave syrup)? It’s a legitimate question, and a great observation by @alildabofbourbon. That’s another question, but there’s no question that the story just began.

Slapdick ‘Whiskey’ is bottled and branded by Coach Jason Brown, most well known for his appearance in the Netflix program: Last Chance U, and also founder of the Slapdick Podcast. The name is certainly unique, if a bit off color. Coach JB took no time to begin to harangue over the extremely casual questioning poised indirectly at the brand. Via DM, he began to immediately question her observation, occupation, and most importantly: motive.

The nasty commentary continued to escalate, with Coach JB asserting by unsolicited DM, that gross incompetence was to blame. Perhaps an ironic twist of fate, given someone releasing a spirit referred to as Slapdick, and making his debut to the whiskey market with venom and vitriol. Then it got nasty: “Why don’t y’all try it first and stop hating you know damn well y’all have had much worse in your mouth and on your tongue”, he writes in an Instagram comment. 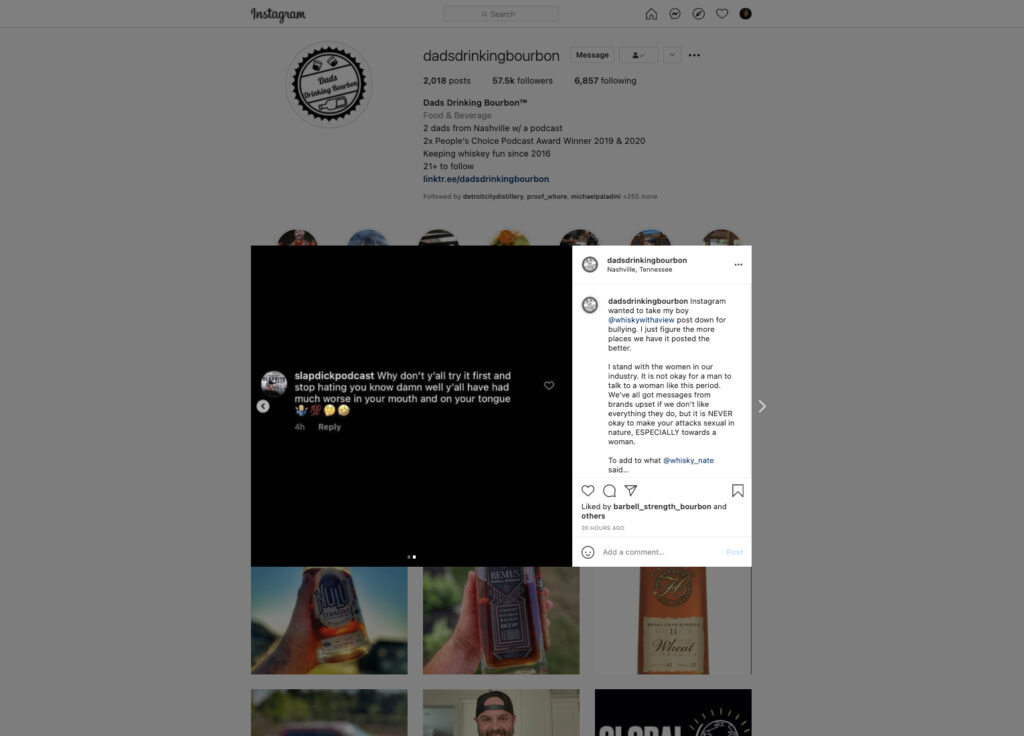 @alildabofbourbon’s response to the unjustified DM’s: “I was completely shocked & appalled at his initial response to my post. I re-read it several times because I initially couldn’t believe it, because my my post was only a picture with a cheeky message nothing slanderous at all. Did several people in the comments have a visceral reaction to the name, absolutely, but the majority were great questions from educated whiskey enthusiasts. Asking things like, how was the label approved? What is agave whiskey etc. But rather than taking an opportunity to publicly demonstrate his pride and introduce a new product he chose to reply with a vulgar sexist insinuating response.. When I reflect on that morning, I still feel as if it wasn’t real or possibly even a bad dream.”

The whiskey community on Instagram has begun to draw up sides, with the majority of accounts siding behind @alildabofbourbon. A notable post hit today, from the Dads Drinking Dad podcast reposting in support of WhiskeyWithAView – whose post bringing JB’s behavior to a wider audience was removed by Instagram. Dads Drinking Bourbon is a duo of – you guessed it – dads, who often review, discuss bourbon, and enjoy banter on their own podcast. 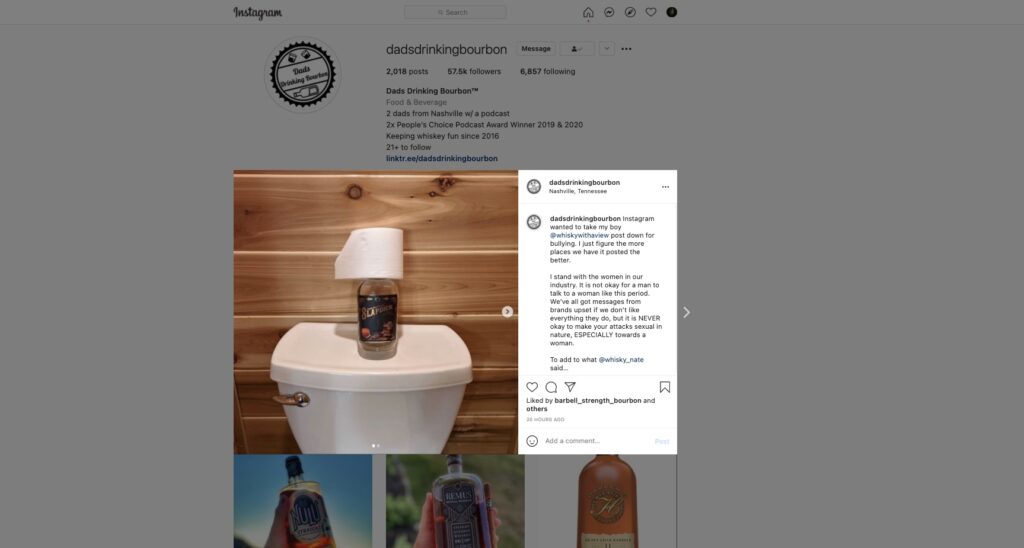 For that, @alildabofbourbon is thankful: “Whew… where to begin. This whiskey community is truly a close-knit and generous family. The support y’all have shown has been overwhelming in the best possible way. It’s not often that I am at a loss for words but I cannot thank this community enough for standing by me through this unfortunate experience. I’m very grateful and extremely PROUD of my whiskey peers, for supporting me and taking a strong stance against bullying and speaking out about female discrimination. But what I’m most impressed by, is the community showing up and not accepting this kind of behavior. This family has shown me that over the past week that we are stronger together and when we all come together real change can happen. My heart is full and filled with joy and can not thank my whiskey family enough”

Many notable accounts are re-sharing the post by Dads Drinking Bourbon, and questioning Coach JB’s conduct –  especially as a coach.

Coach JB was featured in Netflix’s ‘Last Chance U’ – a series devoted to covering the growth and trials of Junior College Football teams. His team was featured, beginning in Season 3 and covered his coaching until his resignation after texting one of his freshman players he would be the “new Hitler”. Following that incident, he was charged with a variety of felonies alleging blackmail and identity theft, in separate incidents.

“Celebrities”, who find fame in other venues, starting or acquiring whiskey brands is increasingly starting to pick up. From Scottie Pippen to Jamie Foxx, some celebrities have done it right (even if they acquire terrible whiskey). In this case, Coach JB earned his fame through a Netflix special, and it’s clear he hopes to leverage it for whiskey and cigar sales.

When asked for her thoughts on celebrities in other circles entering the whiskey market @alildabofbourbon mused: “I feel It’s capitalizing on whiskey being “hot” right now which frankly, I find insulting to the whiskey community.They try to crow bar their way into the market with some schtick, gimmick because they are being given brands of whiskey based on their popularity, notoriety, rather than being based on distilling talents or industry experience. There are a lot of proud, hard working people in this industry and I don’t want to see this community and our whiskey space corrupted by hate and bullying. We need to elevate each other and the American spirt industry not tear it down with “shock speech” or attention seeking slander. I have found over the years whiskey brands help each other to elevate the market but novelty products like this do nothing but dilute the market and taint the unique bourbon industry.

We’ll continue to follow the developments, but one thing is clear for now: definitely stick to well produced whiskey, made by honorable people. We’d recommend Wild Turkey 101, at the same price point as Slapdick. As Matthew McConaughey recently mused – there are few spirits in the whiskey industry like the Russell’s.