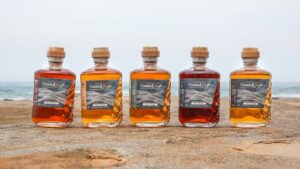 Coastal Stone debuts five new whiskeys that will all hit the market this year. Image via Manly Spirits Co.

Manly Spirits Co. recently released two new whiskies after a production delay. If you recoiled a bit at the name, you wouldn’t be alone. Suspect brand names and bottling choices have been far from absent in the whiskey industry lately, with brands like Slapdick, releases with questionable bottle designs, and sexualized references making their way onto shelves. That said, there’s a sigh of relief to be had when you dig into the branding choices for Manly Spirits Co. The fledgling company is named after the city the distillery is established in: Manly, Australia.

Manly is launching five whiskies this year, with the first two officially out, appropriately named No. 1 and No. 2. No. 1 being distilled in sherry casks, has already garnered a number of accolades from the World Whisky Awards 2022.

However, debuting the new whisky brand has not always been smooth sailing. Manly Spirits Co had to postpone the official launch of its whisky brand “Coastal Stone” last month due to flash flooding. Fortunately, all the damage done by the storms, was reversible, allowing the company to finally release the two new whiskies.

The liquid itself is not the only unique thing about the new brand, however. the bottle itself is something the founders were told could not be created.

Manly Spirits team wanted to pay homage to the unique sandstone cliffs of the Northern Beaches and Sydney Harbour – a contemporary glass bottle, formed with the eroded contours of weathered cliffs and capped with a sandstone stopper.

In an interview with Drinks Digest, co-founder Vanessa Wilton says “We didn’t think it was possible to be able to use real Sydney sandstone on the stopper – in fact, we were told it wasn’t possible, but we’ve never shied away from a challenge here at Manly Spirits. Those finer details of the bottle design, stopper, and label – it’s all important to us. So much time and thought go into every aspect of creating the whisky, so it’s no different when it comes to designing the vessel it will be housed in.” 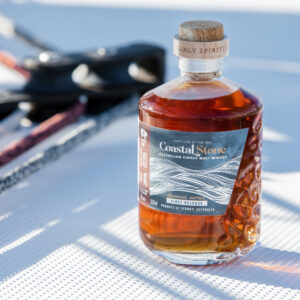 The inaugural Coastal Stone Single Malt Whisky release is from our first eight barrels of ex Australian Sherry/Apera casks that were filled in our debut year of operation. The casks came from coopers in Tasmania and South Australia, where they had been shaved and re-charred.

The casks were all “first fill,” having never previously held whisky, which added to the richness of the flavor. The spirit will retail for $195. 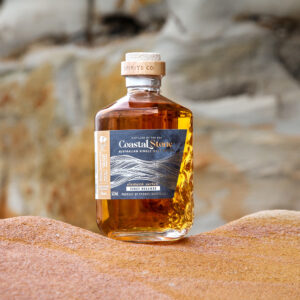 No. 2 barrels also used ‘first fill’ casks, which were ex-bourbon casks from Kentucky having never held whisky, only bourbon, and will retail for $150.