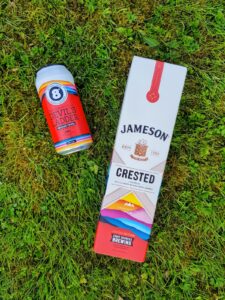 One of the most popular Irish Whiskey has collaborated with Eight Degrees Brewing for the second time, releasing an extremely limited whiskey.

Jameson then turned around and selected a special whiskey to mature in the brewery’s beer-soaked barrels. After four months of maturation, the result is the highly anticipated Jameson Crested.

“We are delighted that in recent years our relationship and indeed proximity to Eight Degrees Brewing here in Cork has created a canvas for collaboration and experimentation in this space, both as part of the Jameson Caskmates Series and beyond.” Says the Jameson company of the collaboration.

A devilishly limited-edition release of fewer than 6,000 bottles globally. Jameson Crested Finished in Devil’s Ladder Belgian Tripel Barrels is the latest offering in our series of iconic collaborations with @eightdegreesbrewing

What to Expect From Jameson Crested Irish Whiskey

Jameson is releasing fewer than 6,000 bottles total making the new whiskey extremely sought after. As of April 23rd, the whiskey could be found at O’Brien’s Wines for purchase.

According to Dave McCabe, Blender at Midleton Distillery, drinkers can expect clove spice and cinnamon along with rich caramelized brown sugar on the nose. “Round with abundant spices and a delicate floral hoppy character.” and finishing with “Lingering with the spices slowly fading, allowing the sweet nature of the oak and malt to remain until the very end.”