Whistle Pig’s oldest whiskey to date has aged almost two decades and originally debuted in 2019. It was a very well-received bottle and highly coveted due to the exclusivity of the release. 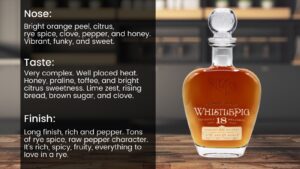 However, don’t let the collector’s appeal or steep price tag put you off. It’s definitely worth a shot. Not only is it highly ranked with a Whiskey Raiders, but The bottle also comes with a bespoke glass topper, handmade in Vermont, as well as being certified kosher rye.

Whistle Pig partnered with Simon Pearce to create the custom glass stopper. It is custom-made for the 18yr Double Malt Rye bottle created in Burlington, Vermont’s art district. Each stopper is unique, having been pressed by hand, but it’s not only art; it’s also historical. The press used to make each stopper is made from one of the last remaining 19th-century glass pressing machines. It’s an antique machine rescued from a historic factory, according to the Whistle Pig Website.

Where and When to Buy

While you are able to order directly from the Whistle Pig website, it is not always in stock. However, Drizly‘s availability has been promising.

Lastly, don’t hesitate to purchase this prestigious and show-stopping rye whiskey. If we learned anything from their initial release, they go fast.