Peerless Distilling announced it would release its Double Oak Bourbon in what is probably a bid not to get left behind by competing craft distillers.

The distillery does not have the reputation of being a great whiskey despite the high price tag. Typically a bottle will put you back $125 for bourbon or rye that has only aged two years. Now the brand is expanding its portfolio with a new bourbon. 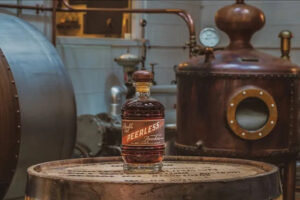 Peerless doesn’t want to be left in the dust with an uptick in craft distillers releasing double-oaked spirits. However, being on-trend doesn’t guarantee an excellent end product, and I would say, based on their current offerings, that the bourbon in the bottle will most likely disappoint.

The first bottle sold will be auctioned off on September 16th, and bottles two through 250 will be specially labeled and signed. No doubt to build hype and exclusivity around the brand and encourage collecting.

With that in mind, it will be interesting to see how much the bidder ends up paying for bottle number 1. If they are wise, hopefully not too much.