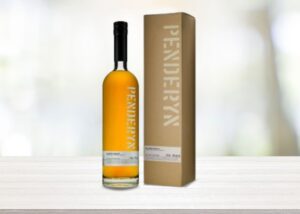 The small-batch release comprises 1,210 bottles of a combination of single malt from an ex-bourbon barrel, an STR cask (Shave, Toast, Re-Char) and two sweet Portuguese wine casks. This limited release is the first in a series of small batches that will be released in the United States.

Penderyn’s Master Blender, Aista Phillips, has crafted a small batch of whisky by marrying a selection of unconventional casks. This batch is distinct from anything else in Penderyn’s range of premium single-malt Welsh whiskies, according to Giancarlo Bianchi, Penderyn’s commercial director.

The batch includes 25% STR casks, a technique that was developed by the late Dr. Jim Swan. STR casks add a distinct touch to the flavor of the whisky. Swan was an expert distiller who was instrumental in creating Penderyn’s house style.

Penderyn USA Limited Release #1 is a 75% double-distilled in a traditional “lantern” still with the remaining 25% distilled in Penderyn’s signature single copper-pot Faraday Still. The limited-edition whisky is released in the U.S. as Penderyn gears up to celebrate the one-year anniversary of its new flagship distillery, which opened to the public on June 1, 2021, in Llandudno, North Wales.

The marriage of sweet Portuguese wine and ex-Bourbon casks results in a nose of apples and pears with a creaminess that incorporates caramel and raisins. The mouthfeel is initially sweet with caramel and toffee notes before evolving into a more savory flavor profile with hints of oak and spice. The finish is long and lingering, with a creamy mouthfeel and a balanced sweetness that lingers on the tongue.