On July 9, President Joe Biden addressed the White House about an executive order he signed that, if successfully implemented, will bring about many changes that will lower the barriers that impact many independent distilleries, wineries and breweries. This executive order seeks to relax some of the stringent hurdles that exist for new craft operations to begin doing business in the alcohol industry.

In layman’s terms, things like labeling laws will be relaxed, making it easier for smaller and newer companies to launch their products. We all know Whistle Pig is going to be happy about that. The current landscape of whiskey is very much tilted in favor of larger producers with better supply chain protection and much larger margins. Generally, the largest producers are publicly owned corporations, although Heaven Hill — the largest family-owned whiskey producer in the world — is an exception. Left and right, small craft producers have been gobbled up by conglomerates or large commercial operations. Take, for instance, High West Distillery’s acquisition by Constellation and Woodinville’s buy-out at the hands of Moët Hennessy Louis Vuitton. 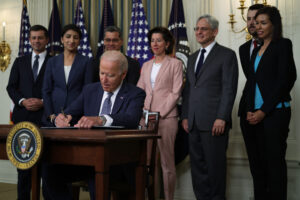 What else does it mean?

It will discourage monopolies from taking over the industry. Massive conglomerates that own many distilleries are more common than you may think. It will allow for more competition within the market, which could mean better pricing and more options for the consumer. With fewer barriers to new producers (big and small), consumers will begin to enjoy more and more options. Ideally, these efforts will benefit consumers with wider access, better prices and clearer information.

“The executive order I’m soon going to be signing commits the federal government to full and aggressive enforcement of our antitrust laws,” Biden said at the signing ceremony. “No more tolerance for abusive actions by monopolies. No more bad mergers that lead to mass layoffs, higher prices, fewer options for workers and consumers alike.”

Antitrust enforcement has been a notable facet of Biden’s plans in office, and it’s refreshing to hopefully see these benefit the whiskey industry, as well. Whiskey Raiders will stay tuned and keep an eye on the proceedings as they develop.