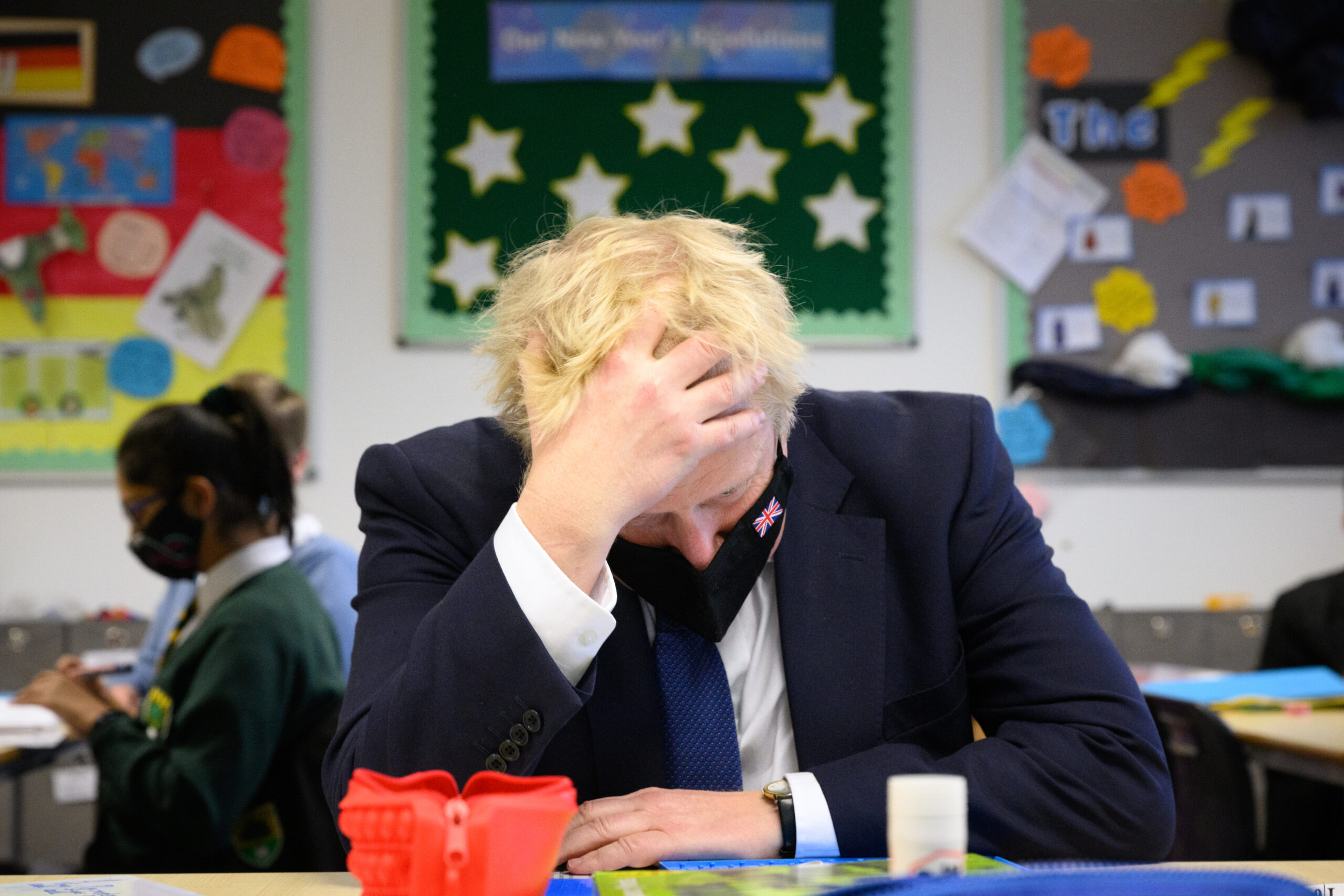 Britain’s Prime Minister, Boris Johnson, speaks with pupils in a maths class as he makes a constituency visit to Oakwood School on Jan. 10, 2022, in Uxbridge, England. (Photo by Leon Neal/Getty Images)

United Kingdom Prime Minister Boris Johnson came under fire after it came to light that his secretary invited upwards of 100 people to a party with a “bring your own booze” rule in the midst of the first COVID-19 lockdown, according to BBC. About 30 people showed up.

ITV News reported that it obtained a copy of the invitation email, sent by principal private secretary to the prime minister Martin Reynolds, and published a photo of it. It reads:

After what has been an incredibly busy period it would be nice to make the most of the lovely weather and have some socially distanced drinks in the No10 garden this evening.

Please join us from 6pm and bring your own booze!”

The party is alleged to have taken place May 20, 2020, the same day that Culture Secretary Oliver Dowden told the public: “You can meet one person outside of your household in an outdoor, public place provided that you stay two meters apart.”

This party plus other alleged events sparked what the Washington Post called a “heated session” Tuesday in Parliament.

Johnson didn’t attend the session, instead allowing himself to be represented by Michael Ellis, a minister from the Cabinet Officer. Ellis apologized on behalf of the government, “unreservedly for the upset these allegations have caused,” which caused the chamber to break into “scornful laughter,” according to the Washington Post.

Angela Rayner, a leader of the opposing Labour Party, questioned Ellis as to why Johnson hadn’t attended the session, saying that his “absence speaks volumes.”

“The public have already drawn their own conclusions,” Raynor said, according to the Washington Post. “He can run but he can’t hide.”

Ian Blackford, head of the Scottish National Party in the Parliament, said, “this is a prime minister who has lost his moral authority.”

Ellis and Johnson both have responded to questions regarding the alleged parties by saying they won’t or can’t say more because the gatherings are under investigation by government worker Sue Gray. We should wait to see what the results of this investigation are,” Ellis said.

A photo published by The Guardian showed Johnson and others sitting at tables with wine in the Downing Street Garden in May 2020. In the photo, said to have been taken five days before the May 20 party, people are spaced, but there is little space between the people at each table, and no masks are visible.

When asked about the photo, Johnson said, “Those people were at work, talking about work,” according to LBC.

BBC also reported that Downing Street staff members attended a gathering with Johnson’s wife, Carrie Johnson, in the flat where she lives with the prime minister, on Nov. 13, 2020. A spokesman for Mrs. Johnson denied the gathering took place.

On Nov. 27, 2020, a leaving event that involved drinking was held for an aide, and Johnson made a speech, according to BBC. On Dec. 10, 2020, the Department for Education had an office gathering to thank staff members for their work. Four days later the Conservative Party held an “unauthorised gathering” at its headquarters.

On Dec. 15, 2020, BBC reported, a Christmas quiz for staff was held, and a photo published by the Sunday Mirror showed Johnson present and sitting between two colleagues. Johnson denied any wrongdoing. The following day, the Department for Transport apologized after admitting to a party in its offices, calling it “inappropriate” and an “error of judgment.”