First Signs Of Fall: Pumpkin Spice Whiskey Is On The Way 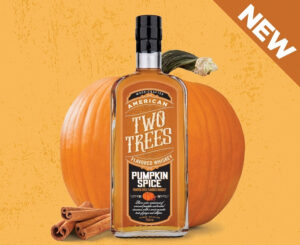 Enough is enough ya’ll. And this is coming from a woman who counts the day that Starbucks releases the PSL as the first day of fall.

According to the press release “Two Trees Beverage Co. Inc. introduces Two Trees™ Pumpkin Spice and Peppermint wood-crafted flavored whiskeys. Both of the new varieties will start shipping to retail and on-premise operations such as bars and restaurants that sell adult beverages mid-September. Both of the new varieties are available in 750 mL bottles, are 70 proof and 35% ABV. ”

The problem with these flavored whiskeys is that they’re terrible, and there are plenty of terrible flavored whiskeys to back that up. Take, for instance, the current hotness in flavored whiskey: Skrewball. However, the worst part about the pumpkin spice (and peppermint for that matter) is that it’s so overdone and gimmicky at this point. Flavored whiskeys have always been a staple of tailgates and bottom shelf mixing, but this sounds downright unpalatable. The worst part: Sons of Liberty released a Pumpkin Spice Whiskey almost 5 years ago, with identical stats, and it flopped immediately.

That being said, if you truly can’t resist a pumpkin spice flavored drink (I’m not here to judge) the press release states that Two Trees™ Pumpkin Spice whiskey has flavor notes reminiscent of seasonal pumpkin and toasted cinnamon, with a sweet aromatic taste of ginger and allspice. The new whiskey products are available in six-count cases and have a suggested retail price of $21.99 per bottle.