Only 70 Sets of These Queen Elizabeth Glasses Were Sold
Article 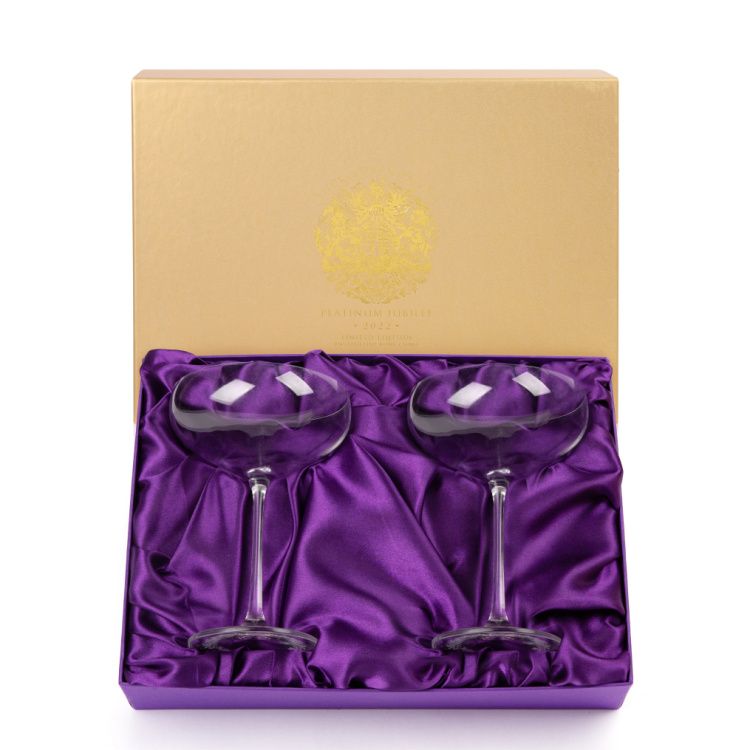 Only 70 sets of these Platinum Jubilee champagne saucers were released, celebrating the 70th anniversary of the rise to the throne of Queen Elizabeth. (Photo: Royal Collection Shop)

The Royal Collection Shop released sets of champagne glasses to celebrate 2022’s Platinum Jubilee of Queen Elizabeth — the anniversary of her accession to the throne, which occurred Feb. 6, 1952, when she was 25 years old.

Nonetheless, the glasses sold out almost instantly, according to The Telegraph.

The glasses are 18 by 12.5 centimeters. The Royal Collection Shop website describes them as follows: “These exquisite champagne saucers are wonderfully engraved, on the foot, with olive branches and wheat and the EIIR [Elizabeth II Regina] cipher to celebrate Her Majesty’s Platinum Jubilee. Renowned for their classic shape, this magnificent pair of champagne saucers are perfect for toasting those momentous occasions.”

The glasses come housed in a “beautiful satin lined gift box with a numbered certificate,” according to the shop.

Only 70 sets of the glasses were released to represent the 70 years Queen Elizabeth has held the throne.

If you were one of the lucky 70 to acquire a set of the glasses, we recommend making a Dubonnet & gin — the Queen’s favorite cocktail — first thing once you receive the glasses. The Queen even honored Dubonnet with a Royal Warrant, a recognition that a good is regularly supplied to the Royal Household. Royal Lochnagar Distillery also received a Royal Warrant in December.