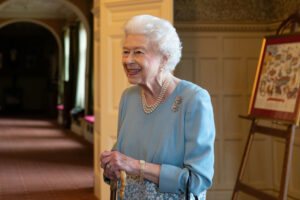 Queen Elizabeth celebrates the start of the Platinum Jubilee during a reception in the Ballroom of Sandringham House on Feb. 5in King’s Lynn, England. (Photo Joe Giddens – by WPA Pool/Getty Images)

Do you have what it takes to run a pub owned by Queen Elizabeth? That is the question that Landles, an estate agency based in Norfolk, England, will decide the answer to as it searches for someone to take over a former social club on the Sandringham Estate, owned by the Queen herself.

The social club, which was opened by King Edward VII (the Queen’s great-grandfather), closed after membership dwindled amid the COVID-19 pandemic. Now, Landles is looking for someone to take over and relaunch the pub with a different look and feel.

The Queen hopes to find someone willing to mix both modern elements and revive the 1844 building back to its former glory when patrons would frequent the pub.

Landles describes the building as “full of character and occupying an elevated position” with “tremendous panoramic views over the adjacent farmland and the wide blue skies of North West Norfolk,” according to Network TEN.

Maybe she’ll build a tunnel to this pub as well, shortening the travel time between her home and her drink.