Julie Macklowe is an American entrepreneur, best known for founding the former QVC skin-care line vbeauté. Recently, she’s expanded outside of skin care and into whiskey, with a bold claim that she launched “the world’s first luxury American single malt whiskey” with her new brand The Macklowe, named after herself.

The whiskey is aged for seven years, bottled at 46% ABV and priced at an astronomical $1,500 — with only 237 bottles produced for its initial run. Macklowe herself has pre-sold all allocations to a chosen list of individuals and local New York restaurants and bars that share her affinity for pretentiousness—I mean quality.

Those interested in trying the single malt can try the bar at Eleven Madison Park or Daniel – two renowned fine dining establishments in Manhattan – or Ralph Lauren’s Polo Bar.

The bottle design was inspired by the entrepreneur’s favorite Hemmerle ring, which she often wears. She wanted the bottle to look like “a flask that felt like it was jewelry.”

Macklowe is distilling an American spirit that isn’t governed by the Scottish standards for single malt Scotch, so she and her crew decided to break away from tradition by distilling her single malt in Kentucky using a column still and copper doubler, according to Vogue. 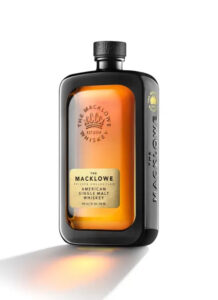 Scotland’s renowned Ian MacMillan, former master blender for Burn Stewart, maker of well-known brands Bunnahabhain, Tobermory and Deanston, was brought on as head blender by Macklowe. They decided to make her spirit in Kentucky at an undisclosed distillery that Macklowe refers to as “the Ferrari of American whiskey distilleries,” using the highest-grade Kentucky barley on the market.

“Our philosophy is that if you use the finest quality ingredients and casks, you will make the best product,” Macklowe told Vogue. Only time will tell if that’s true.