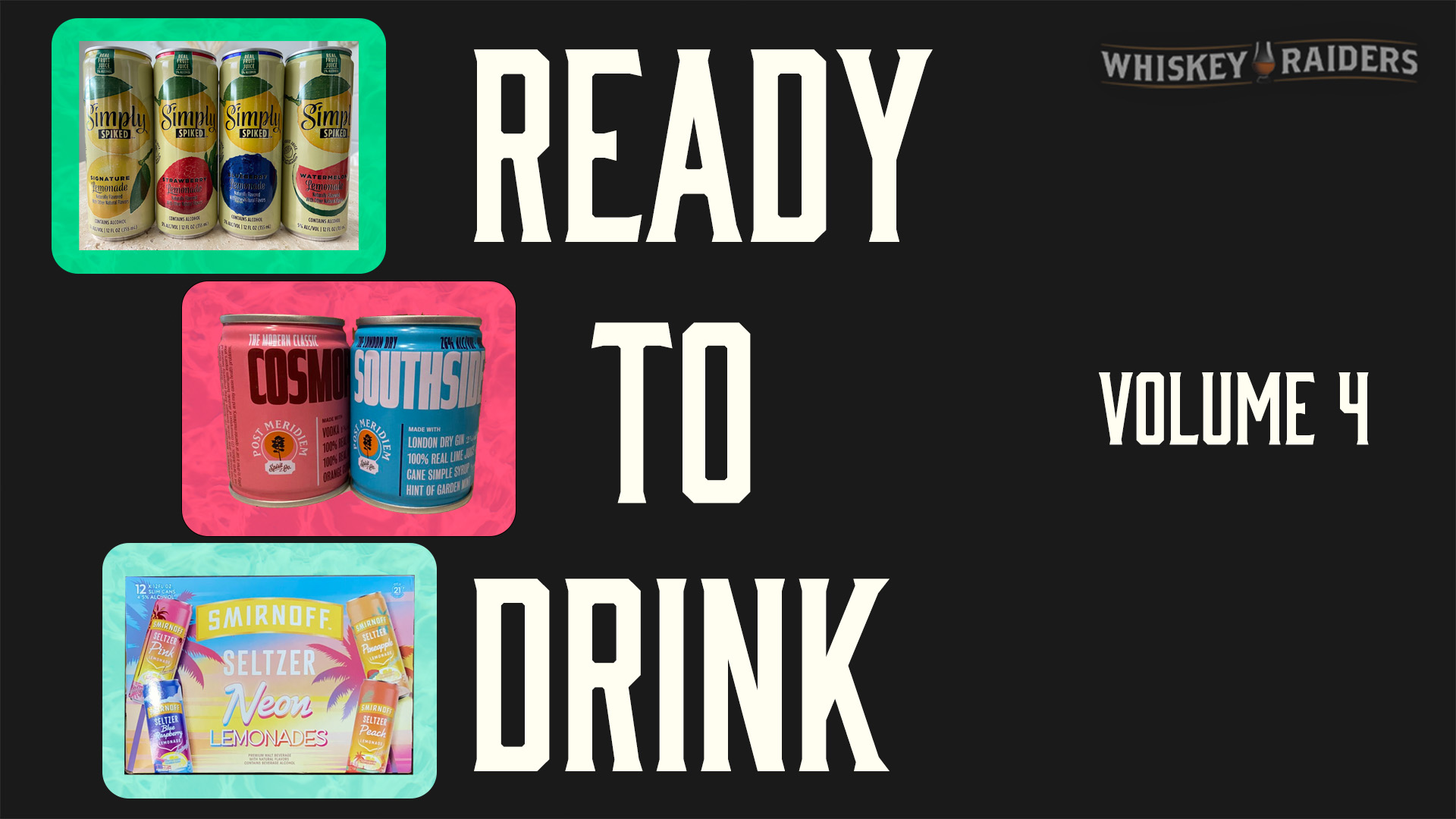 Welcome to the fourth edition of the 2022 Ready To Drink rundown. Here at Whiskey Raiders, lots of ready-to-serve drinks cross our desks, the majority being canned cocktails. In this series, we present the canned and ready-to-drink (RTD) releases we’ve tried recently. Now, more than ever, shelves are crowded with different expressions, all vying to be purchased. With warmer weather on the horizon, canned cocktails and drinks offer convenience and portability that carrying around a home bar just can’t compete with. Which are a go and which should you avoid? We’ve got you covered. In case you missed the previous volume of Ready To Drink, check it out here, featuring new releases from Bacardi, On The Rocks, Ciroc, Topo Chico, Tip Top Proper, Arnold Palmer Spiked and Betches’ Faux Pas Cocktails. 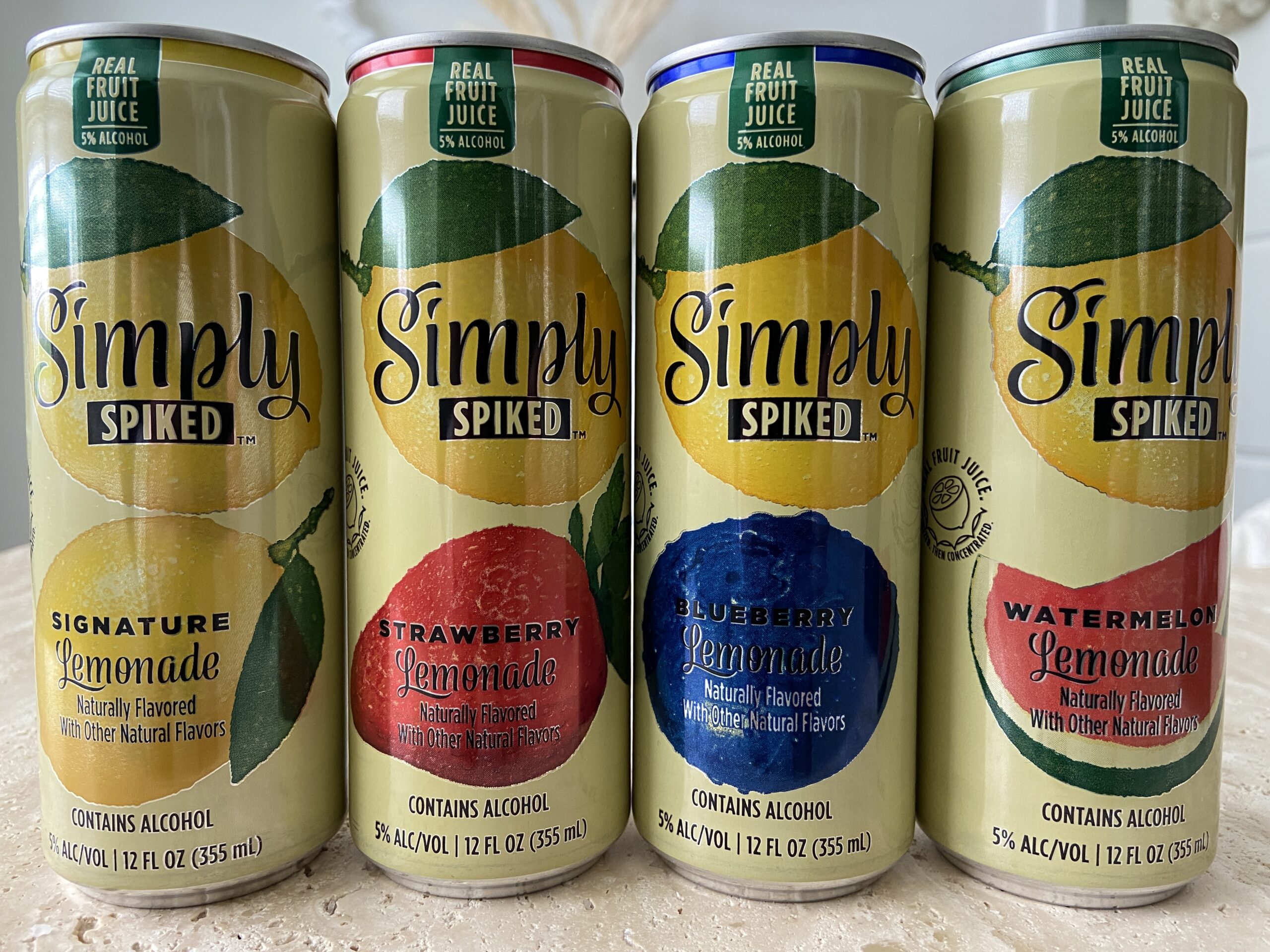 I’ve been looking forward to Simply Spiked Lemonade — an RTD brand inspired by Simply Lemonade, the No. 1 chilled juice brand in the U.S. — since January, when Coca-Cola and Molson Coors first teased the release. Now, Simply Spiked Lemonade is here, launching to shelves across the U.S. on Monday in four-flavor 12-packs, as well as 24-ounce standalone cans.

Lemonade: This is a very tasty, refreshing lemonade, with a nice mix of tartness and sweetness. These are sparkling, which I didn’t expect because original Simply Lemonade isn’t, but I like the fizz. It’s not too much, and it works well. 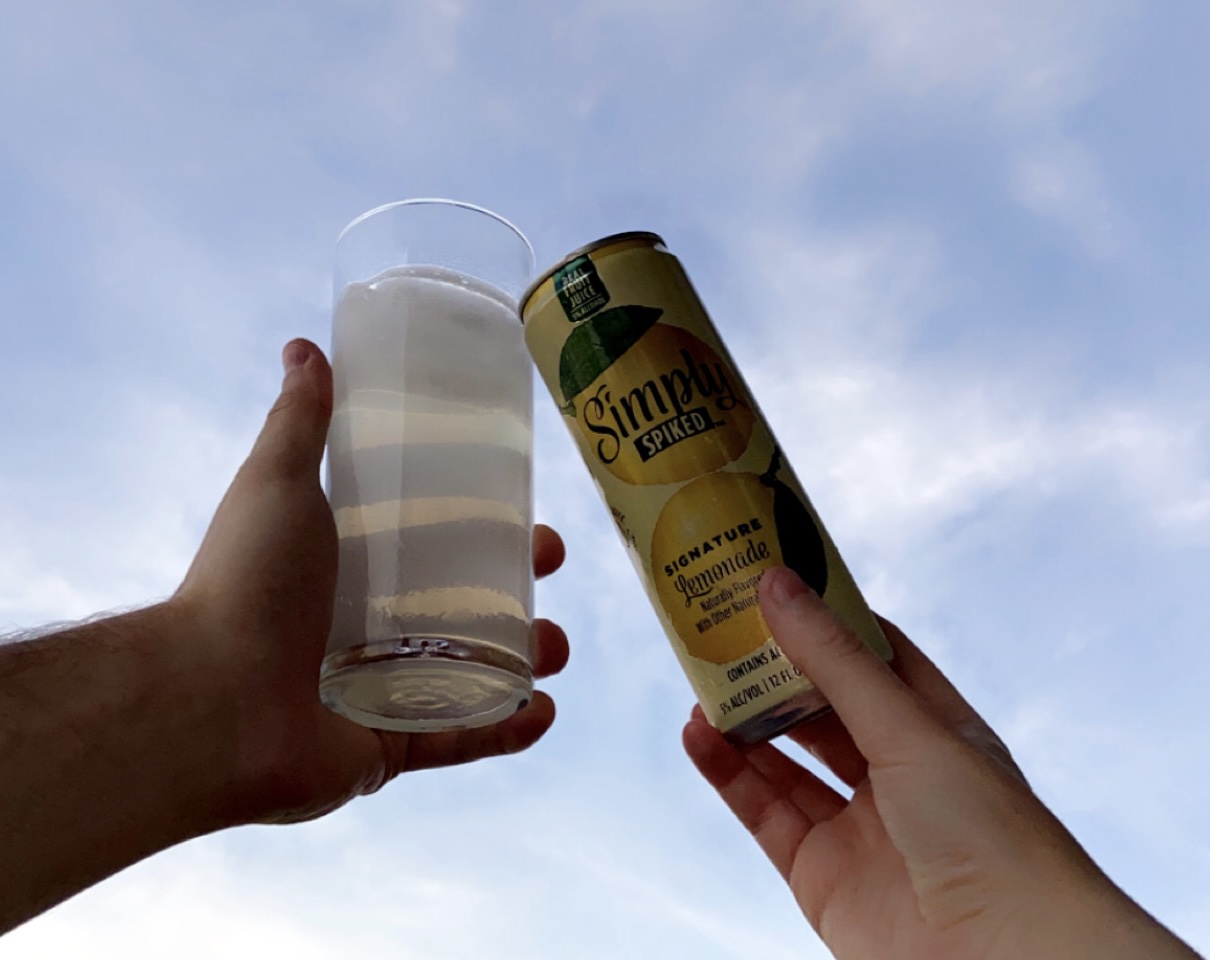 Strawberry Lemonade: This is very good. The jammy strawberry flavor is pretty good but slightly cloying. Overall, this is still a winner, although it’s probably the weakest of the group.

Blueberry Lemonade: The highlight of the range for me, Simply Spiked Blueberry Lemonade is absolutely delicious. The blueberry flavor seeps through soft and sweet, balanced out wonderfully by lemon and fizz.

Is Simply Spiked Lemonade quite as delectable as original Simply Lemonade? Probably not (although Blueberry Lemonade and Watermelon Lemonade come very close), but they’re delicious nonetheless. Each drink contains 5% ABV, but you can’t taste the booze. The Simply Spiked Lemonade range is made with real fruit juice from concentrate, and it shows. These hold their own against any lower-ABV RTD I’ve tasted. They’re perfect for sitting outdoors on a summer day. I’ll be buying these this summer. Find them across the U.S. as of Monday. 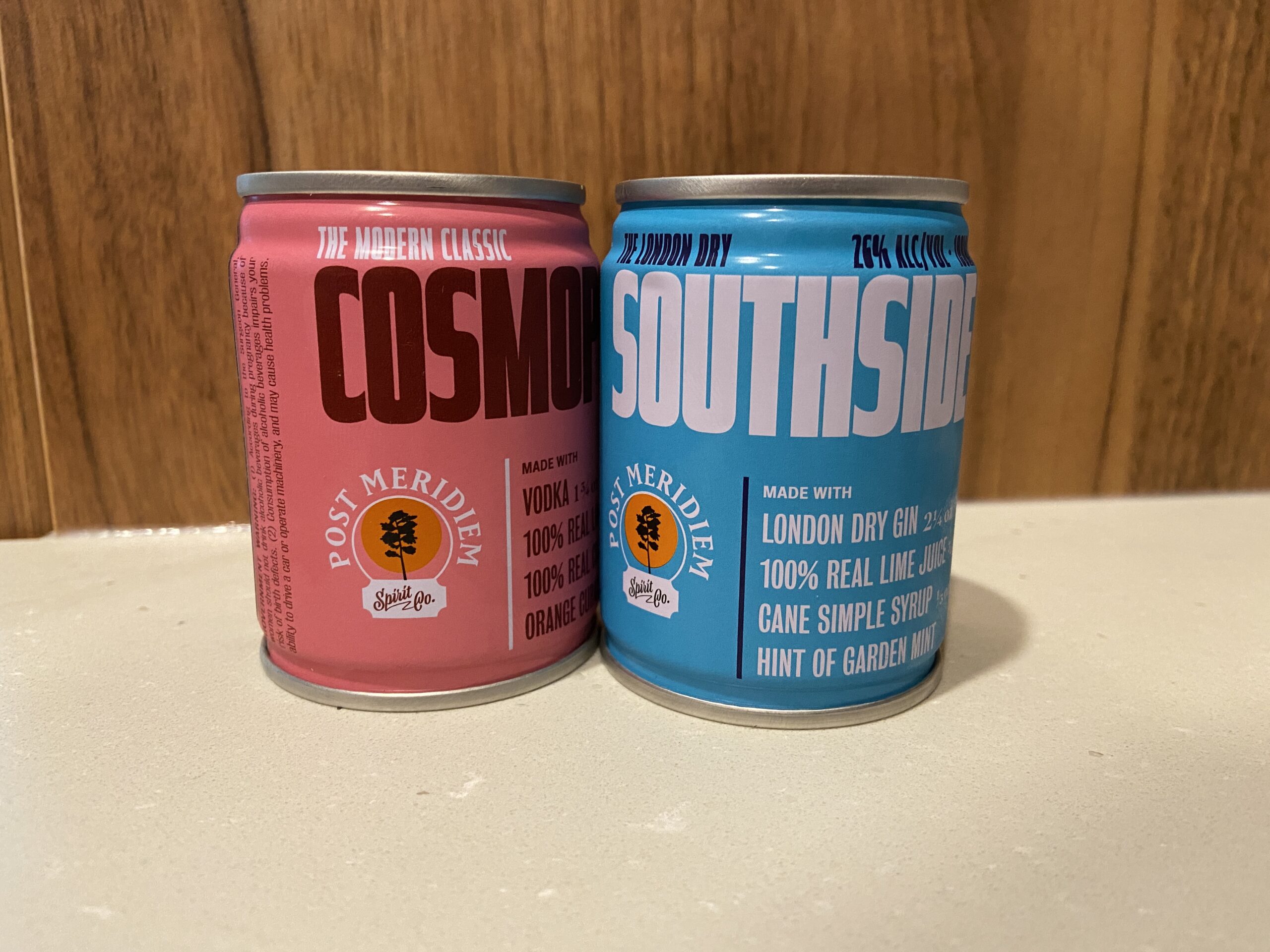 In December, I reviewed the Post Meridiem Spirits range of canned cocktails, which are small in stature, powerful in proof and toothsome in taste. The brand is back at it with two new flavors released in May: The London Dry Southside and The Modern Classic Cosmopolitan.

Just like PM’s other flavors, these cans are miniature at 100 milliliters but strong, with the London Dry Southside containing 26% ABV and the Modern Classic Cosmopolitan sitting at 28%.

The Modern Classic Cosmopolitan: Made with vodka, cranberry juice, lime juice and orange curacao, this is a great, tart and dry cosmo. A balanced blend of cranberry, lime and orange hit you upon first sip. The cranberry and orange fade before you swallow, leaving you with a satisfying dry lime-and-vodka ending. 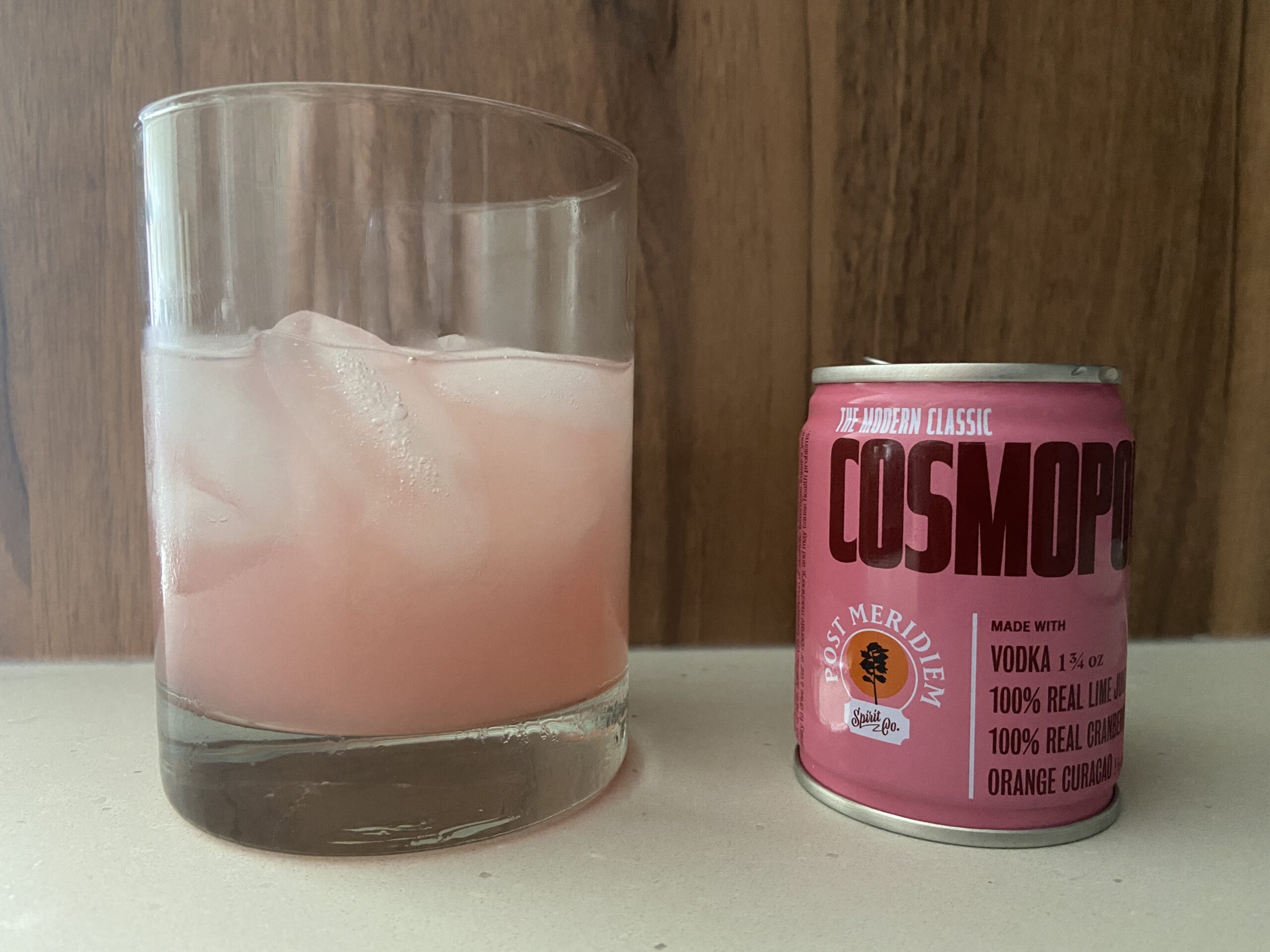 The London Dry Southside: The London Dry Southside is made with gin, lime juice, cane simple syrup and garden mint. This drink is another home run from Post Meridiem’s impressive portfolio. The mint stands out; there’s no sugary-sweet, spearmint-gum flavor here. It truly tastes like fresh-picked mint from a garden. The lime comes through very nicely, and the amount of gin is perfect. This is stupendously mixed — a sweet drink but still boozy.

Post Meridiem’s cocktails sell for $15.96 per four-pack. Order them online or find them in stores in Washington, D.C., Georgia, Massachusetts, Maryland, South Carolina, Tennessee and Texas on the Post Meridiem Spirits website.

Post Meridiem also nailed the aesthetic for these drinks. The Miami Vice color theme is perfect for these superb summer sippers.

Both of the new canned cocktails earned silver medals at the 2022 San Francisco World Spirits Competition. Post Meridiem won double gold for two of its other cocktails: its Old Fashioned, which is delicious, and its Espresso Martini, which has not yet been released nor announced.

Post Meridiem will release a new drink in midsummer, co-founder Andrew Rodbell told Whiskey Raiders. Rodbell said the judges at the SFWSC “fell in love with” the drink. I have to assume that’s the Espresso Martini, and I can’t wait to taste it.

In other RTD news… 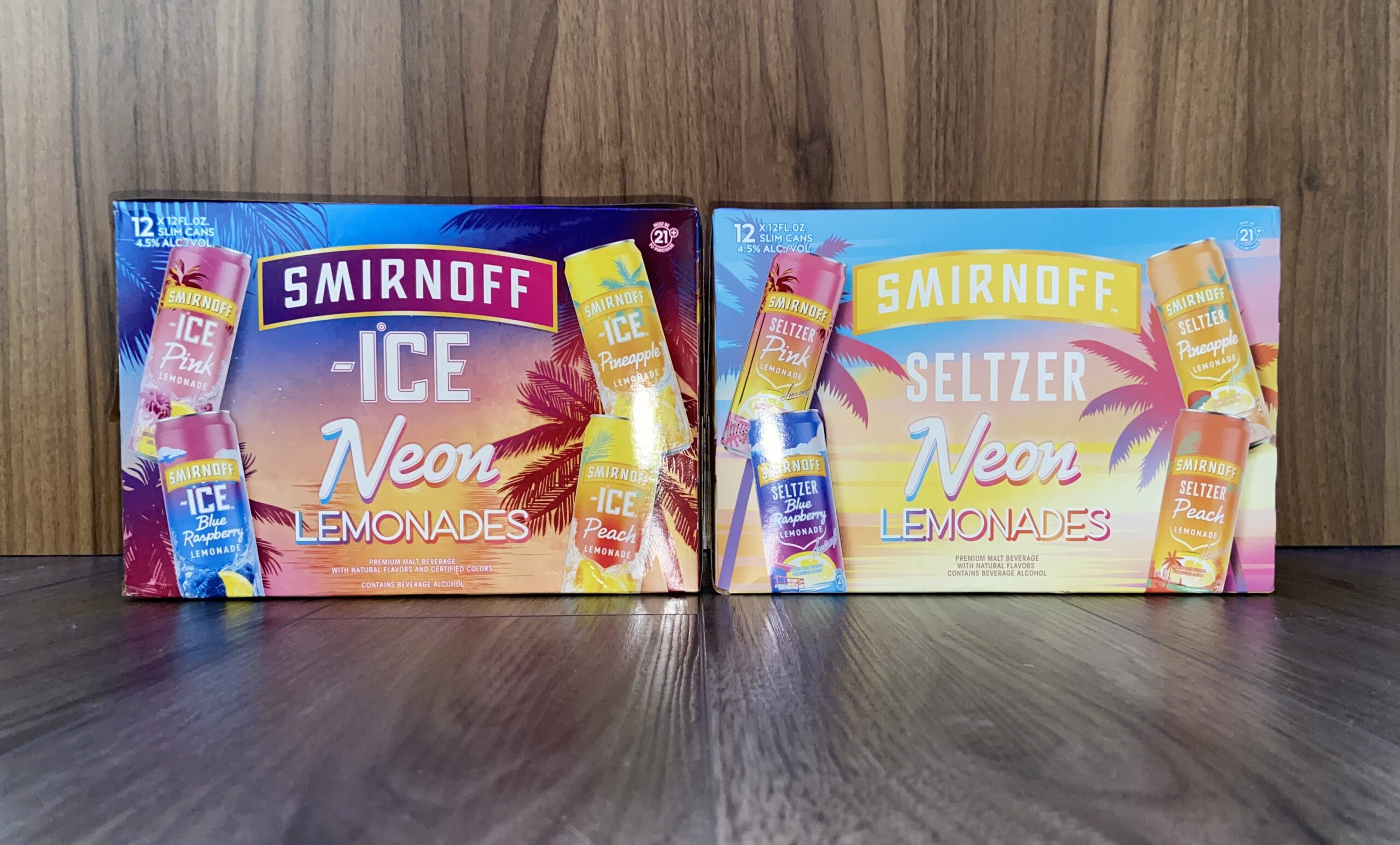 Popular vodka brand Smirnoff is ready for the summer, with a new vodka flavor — peach lemonade — and a new RTD range, Smirnoff Neon Lemonades. The range comprises four flavors: The returning Pink Lemonade and new Blue Raspberry Lemonade, Pineapple Lemonade and Peach Lemonade. The Neon Lemonades collection is available in Ice and Seltzer form. Ice are canned versions of the popular bottled Smirnoff Ice products. Ice is a lightly carbonated flavored malt, while the seltzers are infused to a carbonated base, making them fizzier. 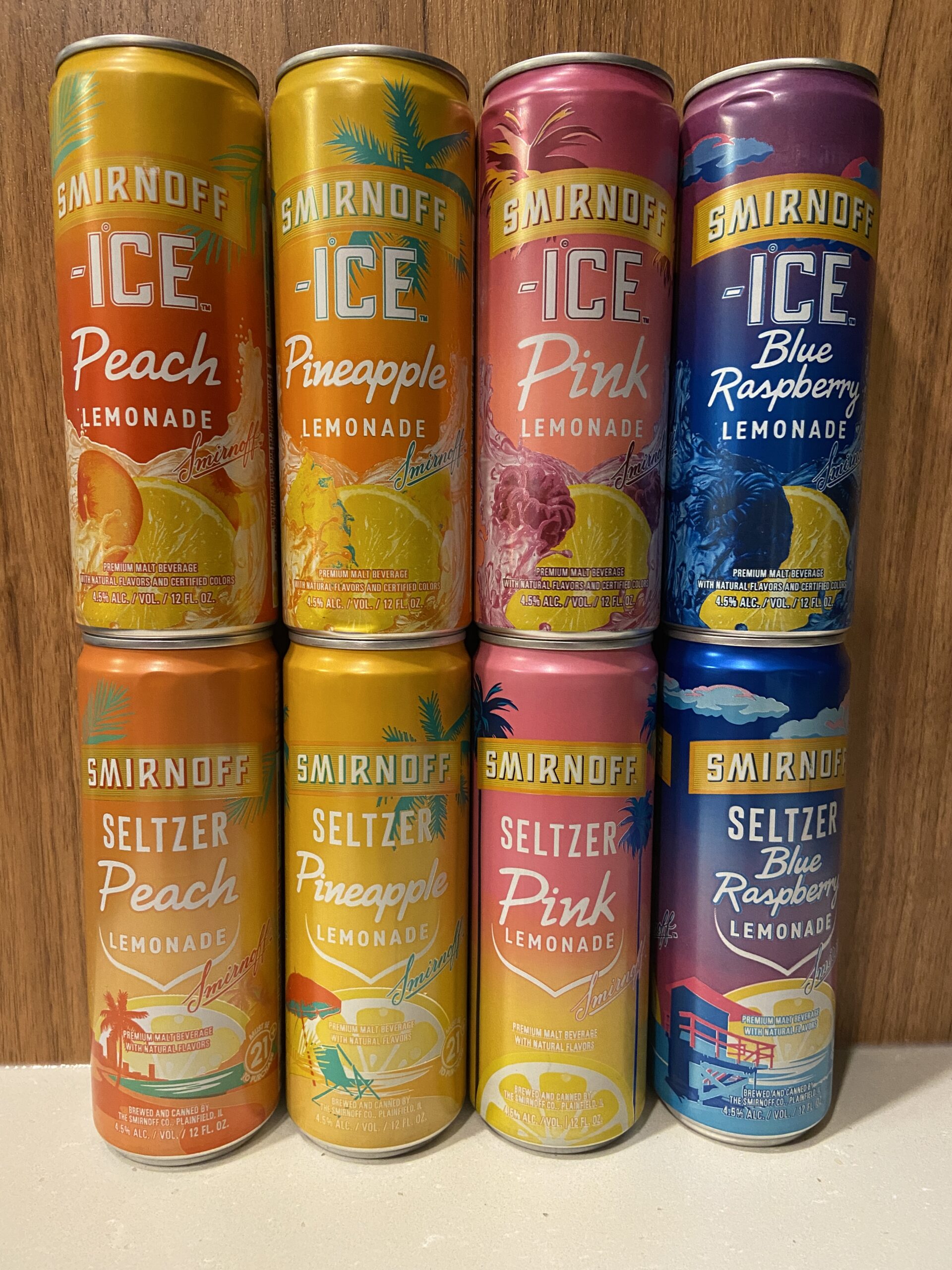 At 4.5% ABV, all of these drinks are pretty light, especially the seltzers, being the lower-cal options. For the most part, I slightly preferred the Ices to the Seltzers, although none are bad. Let’s break down the flavors:

Blue Raspberry Lemonade: This is enjoyable, but I will say I’d need to be in the right mood for it. It pours bright blue and is sugary and tropical. Honestly? The flavor profile isn’t too different from a blue Jolly Rancher.

Pink Lemonade: This is a very tasty lemonade but is a little on the syrupy-sweet side. Overall, this is an enjoyable summer drink.

Pineapple Lemonade: This is too sweet for me. The pineapple flavor is enjoyable but overpowering. I’m not getting much lemon at all, here, unfortunately. A good dose of sour lemon would help go a long way in terms of balancing this. The lemon that is here comes mostly on the front end and fades quickly, leaving you with too much sweetness. This was the only flavor for which I preferred the Seltzer to the Ice; it’s less sugary, and the extra fizz somewhat helps counter the sweetness. The seltzer version did leave a slightly odd flavor in my mouth, however.

This is pretty tasty, but I’ve had better pineapple-flavored RTDs that have managed to be more complex and balanced.

Peach Lemonade: This is pretty boring. It tastes like a run-of-the-mill peach lemonade. The lemonade flavor fades pretty quickly, leaving you with just peach. This isn’t bad, but I won’t remember it and wouldn’t reach for it.

Overall, the Blue Raspberry Lemonade and Pink Lemonade are very good options if you’re in the mood for something sweet and sugary. The Pineapple Lemonade and Peach Lemonade are somewhat mediocre but aren’t a chore to get through by any means. If you’re looking for something light and sweet this summer, Smirnoff Neon Lemonades are a solid buy. Find them across the country at major retailers like Target. 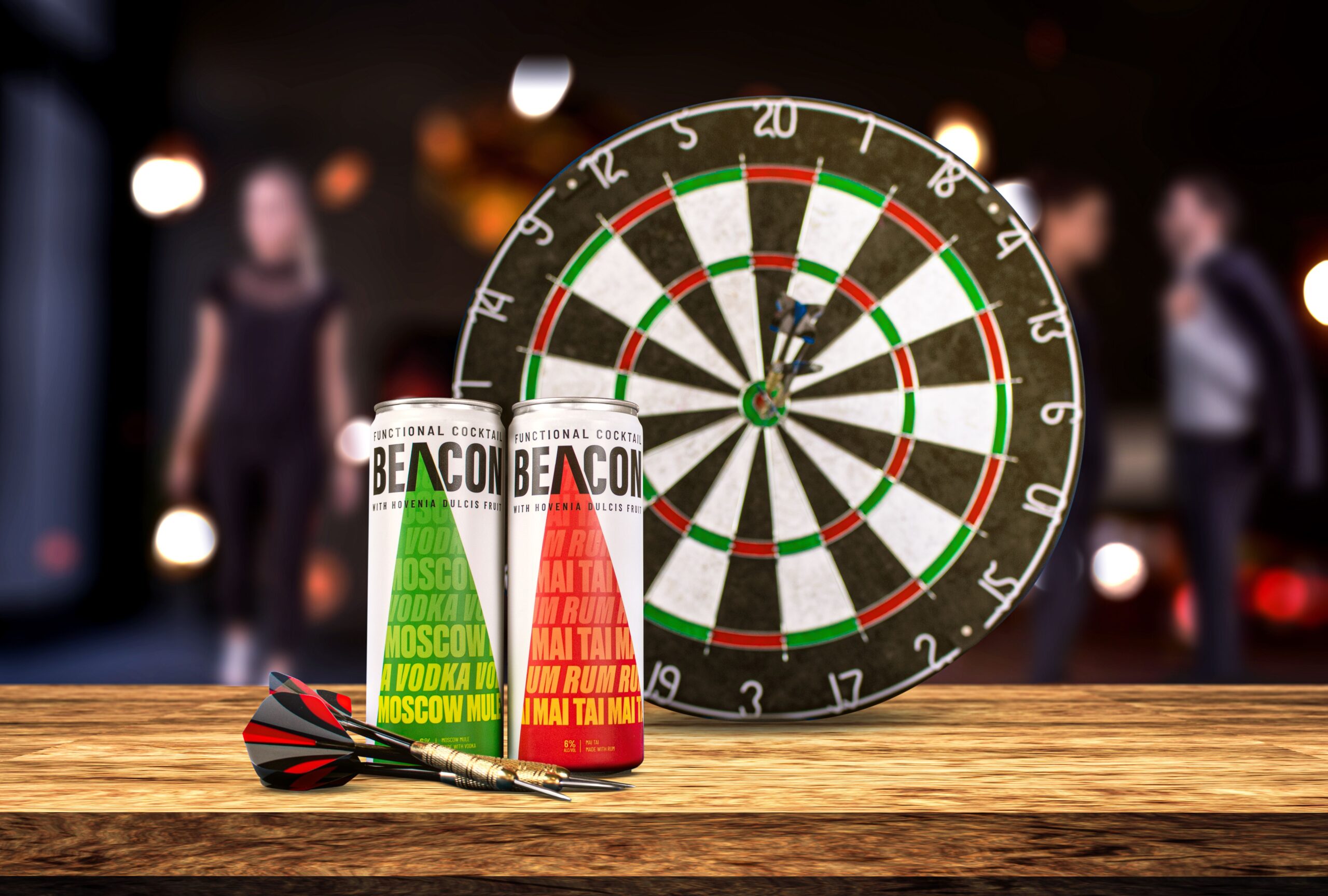 Beacon Beverages in May announced the launch of Beacon Functional Cocktails. Beacon was founded by Ajay Narain, an avid golfer, as an attempt to make a drink that would allow golfers and beyond to drink and get a buzz without completely losing functionality and waking up with a killer hangover the next morning.

Enter hovenia dulcis, a plant long used in Asia for hangover treatments due to its “several pharmacological properties, such as antidiabetic, anticancer, antioxidant, anti-inflammatory and hepatoprotective,” according to a study published in MDPI journal “Molecules.”

Mai Tai: This is tasty. Not exactly a traditional Mai Tai, but it’s a very nice, refreshing drink. I’m getting notes of apple, pear, cinnamon, orange and lime. I wish the proof was cranked up a touch, so the rum would come through a bit more. This is a 6% ABV drink, but I think it would benefit from a bump up to 8-10%. Still though, this is good. It’s very refreshing, with a dry finish. 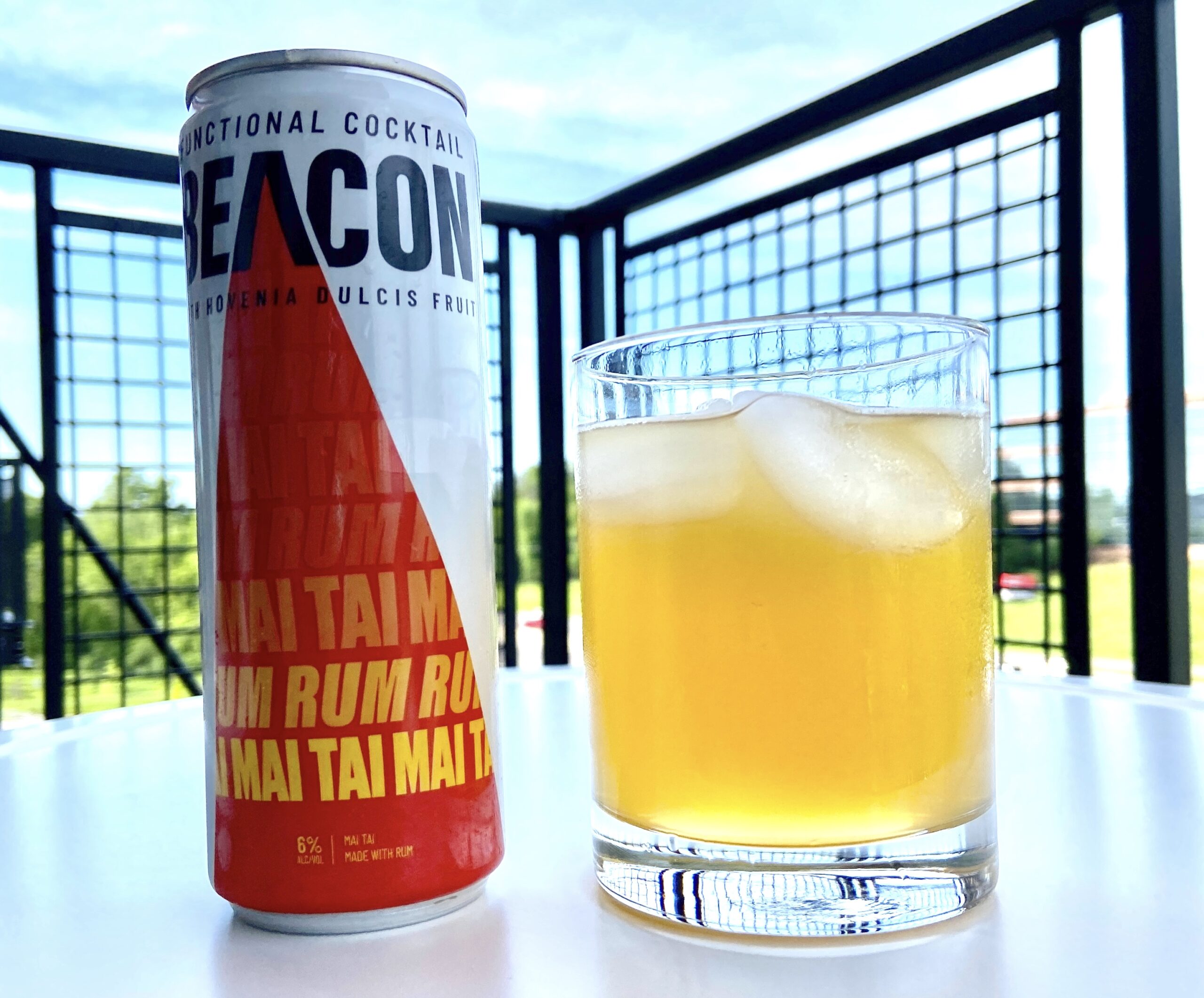 Moscow Mule: I’m getting that pear flavor again – that must be the hovenia dulcis. Lime comes through, too, along with ginger. This is tasty and refreshing, like the Mai Tai, but the mule is tarter.

I enjoyed both of these cocktails. If Beacon eventually expands into other flavors, the brand will need to find a way to deliver interesting, new flavors. The hovenia dulcis imparts some good notes, but the downside of having a common flavor across a range of cocktails is that you lose some freshness. Each of these cocktails certainly has its differences from the other, but you can definitely taste the hovenia palate in both, which I could see needing a break from after a while.

I can’t vouch for their scientific properties, personally, but the research is certainly promising. A functional drink is a cool concept, perfect for a golf course or any other day-drinking environment.

Beacon is not available for purchase yet, but it should be shortly. Narain told Whiskey Raiders that the company has shipped products to distributors in Washington and New Jersey, and also has a distributor lined up in Georgia. 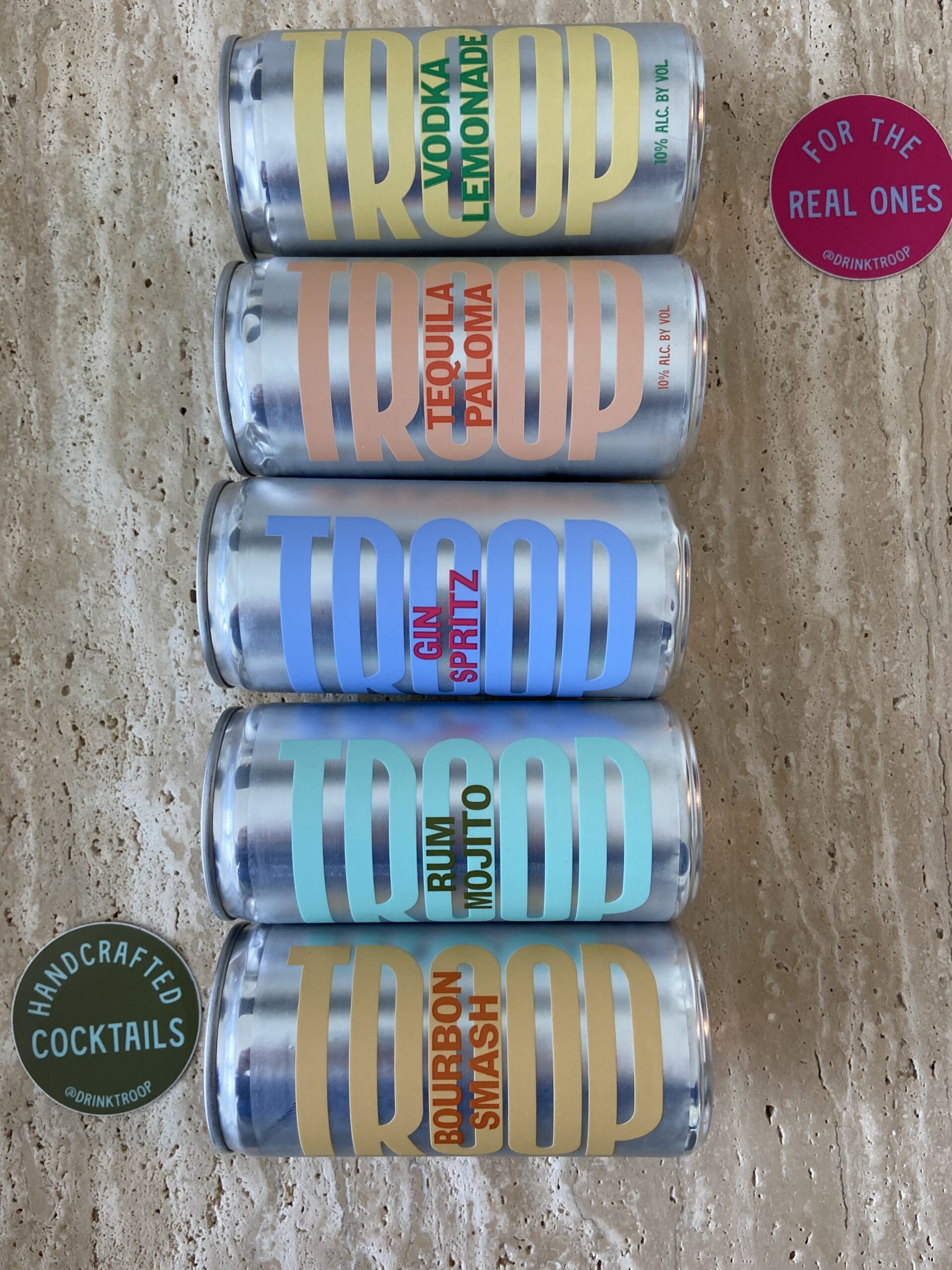 Troop was founded in 2019 by married couple CC and Reed DesRosiers.

Troop’s range of canned cocktails, Vodka Lemonade, Tequila Paloma, Bourbon Smash and Rum Mojito, will be available to guests during home games throughout the 2022 season. Each drink has an ABV of 10%.

Let’s Check Out the Troop Range.

Vodka Lemonade: This is pretty good. The vodka is definitely noticeable on the palate, which I appreciate. 10% ABV is a great sweet spot for an RTD. The lemon adds a crisp tartness. I wish this was a smidge sweeter, which isn’t something I usually yearn for, but it seems right for a lemonade.

Tequila Paloma: This is impressive. Sweet but very smoky, this would be a perfect complement to a barbecue meal. Smoke is a flavor I haven’t encountered much among RTDs, so I appreciate something different here.

Bourbon Smash: Very refreshing. The lemon and mint mingle nicely with the bourbon. This left me with a slightly bitter aftertaste that isn’t too pleasant, but it’s mild.

Gin Spritz: This is very light with lots of earthy gin notes. There’s some sweetness at the front that fades quickly into herbal gin flavors. I wish there was a tad more carbonation here, but it’s a good, dry drink.

Rum Mojito: Dry, fizzy and refreshing, this delivers a lot of lime. Coconutty rum flavors are present and enjoyable.

Overall, this was a really nice range of canned cocktails. All are perfect summertime drinks and at 10% ABV, they’re a good bit stronger than a lot of canned drinks on the market.

Troop is available for purchase nationwide online at drinktroop.com and at select retailers in California and Texas, with more states planned for 2022, CC DesRosiers told Whiskey Raiders. A 12-can sampler pack sells for $48 online, while the 24-pack is priced at $96.

Disclosure: Some or all of the drinks featured in Ready To Drink were provided for review by the brands that make them. This in no way affects our reviews of these products or any recommendations we make, nor was any commission earned from the reviews in this article.